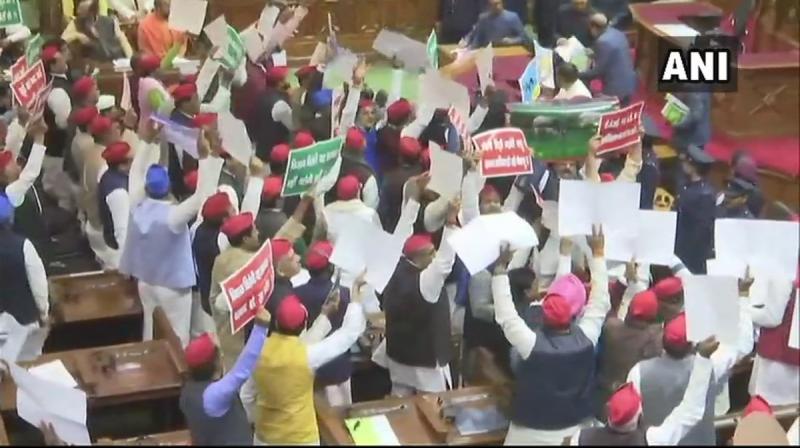 The opposition members also had posters in their hands in which the CBI was shown as a 'cadged parrot'. One of these posters had a picture of a dog with a strap attached to its neck and CBI was written on it. (Photo: ANI)

In his about 55-minute speech, the governor highlighted the welfare and development schemes of the state government, and also justified the renaming of Allahabad and Faizabad districts, saying, "my government has restored their cultural names."

Opposition members, including those from the Samajwadi Party (SP), the Bahujan Samaj Party (BSP) and the Congress, started raising slogans against the government and shouted 'rajyapal wapas Jao (Governor Go Back)' as soon as Naik began addressing the state legislature.

SP members hurled paper balls at the podium, but Naik continued to address the House, with staff using cardboard files to deflect the paper balls.

Speaking to reporters at the Central Hall of the House, Chief Minister Yogi Adityanath condemned the behaviour of the opposition leaders and termed it "undemocratic" and "unparliamentary".

During the uproar, Subhash Pasi of SP, who was standing on a chair, fell and fainted after which he was rushed to a hospital.

The opposition members also had posters in their hands in which the CBI was shown as a "cadged parrot". One of these posters had a picture of a dog with a strap attached to its neck and CBI was written on it.

Some members also had small replicas of cows and bulls in an obvious bid to show that government was not concerned with the stray cattle menace in the state.

In his 28-pages address, Naik said there has been "considerable improvement in the law and order (situation) in the state".

"Now, the common man is fear free and women are not afraid of coming out of their houses even during the night," he said.

The governor said due to the drive against criminals, there has been a substantial decline in serious crimes as compared to the last year. "As many as 7626 culprits were arrested in 3285 of them had police action against them. During these actions, 946 culprits sustained injuries, 73 others were killed. In these operations, 576 police personnel sustained injuries and four jawans attained martyrdom," Naik said.

Property worth about Rs 179 crore was seized while taking action against 289 criminals under the National Security Act and 10,541 others under the Gangster Act, he said.

The address also mentioned the ongoing Kumbh and highlighted works being done by the state government for organising the mega event.

Justifying the renaming of districts in the state, he said that "by changing name of Allahabad to Prayagraj and Faizabad to Ayodhya, my government has restored their cultural names."

On farmer's welfare, Naik said, "A record purchase of 52.92 lakh metric tonnes of wheat was made from 11,27,195 farmers under the price support scheme in 2018-19 and online payment of Rs 9231.99 crore was made within 72 hours." Naik claimed that MoUs worth Rs 4.68 lakh crore were signed during the investor summit in February 2018 and foundation stones of 81 projects, involving an investment of over Rs 61,000 crore, was laid in July by Prime Minister Narendra Modi.

In the power sector, he said in the past 22 months, 94 lakh electricity connections, the highest and a record in itself, have been given in the state. The state has bagged 12 national awards for successful execution and implementation of central schemes, Naik said.

He said the Pravasi Bhartiya Divas was held successfully for the first time in the state in January in Varanasi.

Referring to the Lok Sabha polls, the governor said he would like to urge all voters to exercise their right to vote and ensure maximum voting.

On the uproar in the House, Adityanath condemned behaviour of opposition members in front of governor and termed it as undemocratic. "Behaviour of the SP, the BSP and the Congress in front of the governor is condemnable. It is unparliamentary and undemocratic and such agitation lower their dignity. The Samajwadi Party crossed limits of hooliganism by hurling paper balls and targeted the governor," he said.