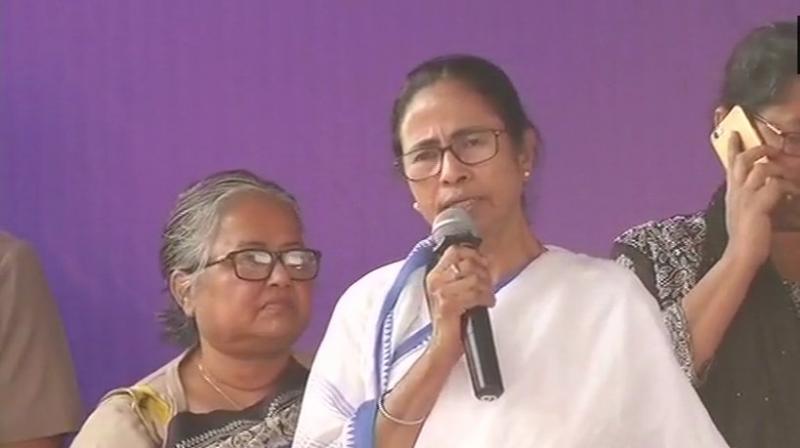 Kolkata: Eager to give her sit-in dharna to “Save the Constitution” heft and national stature, and make it a direct confrontation between her state and the Narendra Modi-led BJP government ahead of the Lok Sabha elections, West Bengal chief minister Mamata Banerjee on Monday reached out to all the anti-BJP parties to thank them for their support to her agitation which, she declared, would continue till February 8.

The ripple effect of political tremors in West Bengal were felt in New Delhi and several state capitals as Ms Banerjee’s combative posturing drew support from several regional satraps trying to sew up an anti-BJP alliance ahead of the parliamentary polls.

DMK chief M.K. Stalin tweeted, “The independence of every institution has been compromised under this fascist BJP Government. I stand with @MamataOfficial Didi in her fight to protect the federal structure of this country and to save democracy. #SaveDemocracy.”

Former Prime Minister H.D. Deve Gowda said in Bengaluru the face-off reminded him of the Emergency days while Andhra Pradesh chief minister N. Chandrababu Naidu alleged in Amaravati that the BJP government was acting with vengeance against Ms Banerjee as the Opposition parties’ rally in the West Bengal capital on January 19 was a great success.

Speculation is rife that some more political leaders from other states are expected to visit Ms Banerjee in the next few days.

Due to board examinations in schools, after February 8 no mike will be used during the protest.

As the political firestorm raged, Ms Banerjee sharpened her salvos at the Modi government. “We always say that the law will take its own course… We respect law. But if someone destroys the main pillars of democracy by indulging in illegal activities, democracy becomes valueless... From that standpoint, our Satyagraha movement has been underway. It is not a silly matter,” she said.

“Everyone has extended their support to this movement. We again and again express our sincere gratitude to all the political parties, state parties who believe in federal structure. It is not our individual fight. It is a collective battle. It is not a political programme. But all political parties can join us in our protest. I would still expect that democracy moves ahead in its own way and the law will taken its own course.”

Ms Banerjee told the crowd, “An attempt of a coup has been underway everywhere, starting with the judiciary. It cannot be supported... We can have ideological differences, but agencies are set after if anyone opposes the BJP... Those who oppose the BJP are branded as anti-nationals. We condemn the atmosphere of hatred which has been created across the country. Do not forget it is a big battle.”

Despite the dharna, Ms Banerjee continued her work and kept her major engagements.

The chief minister chaired a Cabinet meeting with finance minister Amit Mitra and others in a temporary room behind the venue before she skipping the Budget presentation in the Assembly, setting a dramatic precedent.

On the chief minister’s instruction the investiture ceremony of the West Bengal Police and Kolkata was changed from Uttirna, an open air theatre in Alipore, to a stage which has been built near her dharna venue. After awarding the police officials medals, Ms Banerjee in her address to the cops, said, “I am ready to give my life but will not compromise. I did not take to the streets when they touched Trinamul leaders. But I am angry when they tried to insult the chair of the Kolkata police commissioner as he is leading the organisation.”

Earlier, Ms Banerjee slammed Mr Modi over farmers’ issues. Addressing a rally of farmers, she said, “We have taken a decision that we would not take any money from the Centre regarding any of its schemes. The Modi government has snatched the farmers’ rights. More than 12,000 farmers have committed suicide. Their lands have been grabbed.”

Referring to her agitation against the CPI(M)-led Left Front government 13 years ago, Ms Banerjee added, “Back in 2006, I had sat on a dharna for 27 days to return the farmers their lands. Many farmer families are left with nothing. We are the only government which does not allow the farmers’ rights to be snatched away.”

The failed attempt by the CBI to question Kolkata Police Commissioner Rajeev Kumar in connection with the Saradha and Rose Valley chit fund scams on Sunday became the latest flashpoint between the BJP-led Centre and Banerjee, one of its bitter critics. The CBI has accused Kumar of destroying evidence related to the two fraud cases.

The ruling BJD in Odisha said in a statement, “Institutional integrity of the CBI has to be restored. We are a mature democracy and professionalism should be maintained.”

Disgruntled BJP leader Shatrughan Sinha on Monday fired a fresh salvo at the Narendra Modi government, accusing it of playing with fire by targeting Ms Banerjee whom he called a tried and tested mass leader.

“Sirji, what is happening. Why are we playing with fire through the much-maligned, disgraced and condemned government institutions, that too when elections are around the corner,” Mr Sinha tweeted.