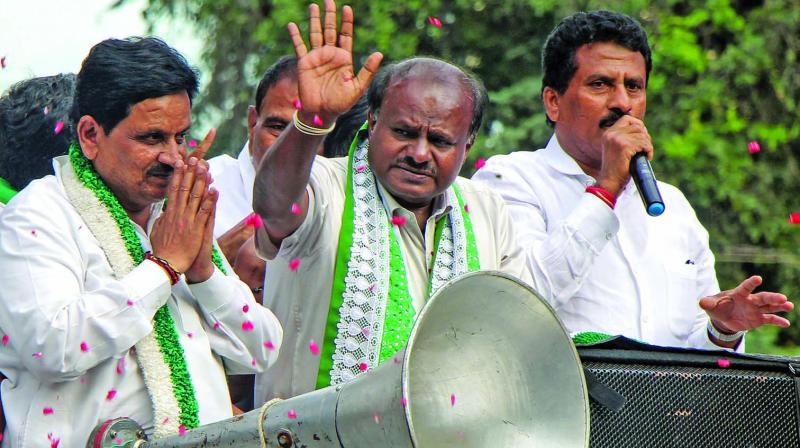 KALABURAGI: Denial of Cabinet berths, which was one of the prime reasons for the collapse of the previous JD(S)-Congress coalition government in the state, could soon haunt the B.S. Yediyurappa government too with a section of disgruntled BJP MLAs set to rock the boat even if the CM secures a simple majority in the Assembly after the December 5 bypolls.

Sources claim that a “suicide squad” is taking shape within the BJP which could make a strong bid to torpedo the Yediyurappa government and ensure the installation of prominent Congress leader from the Hyderabad-Karnataka region — Mallikarjun Kharge as CM — a post which has eluded the veteran more than once.

Most BJP leaders are relaxing after a hectic bypoll campaign confident that the party will romp home in at least eight seats and ensure the stability of their government.

There is however a lurking danger ‘within’ —with a group of BJP legislators who could be described as the ‘suicide squad,’ fuming over being neglected by the party top brass and more so, by the undue importance accorded to disqualified legislators who have all been promised ministerial berths after the bypolls.

They are quietly waiting for the post-bypoll scenario after the December 9 results, when major political developments can be expected in the state.

According to a prominent legislator of Hyderabad-Karnataka, who is an active member of the squad, a group of ten legislators drawn from various districts have decided to strike at the opportune time as they feel they do not have a bright future in the party, especially after the entry of the disqualified legislators into the Bharatiya Janata Party (BJP) .

“We have been legislators for three or four terms and most of us got elected due to our individual charisma. This being the case, we should have been rewarded with cabinet berths but we have been treated badly. On the contrary, the role of the disqualified legislators in helping the BJP form the government is being eulogised day in and day out, which we find difficult to digest,” he said.