Somewhat charged up after the turn of events in Maharashtra, the Congress is coming out with all guns blazing. 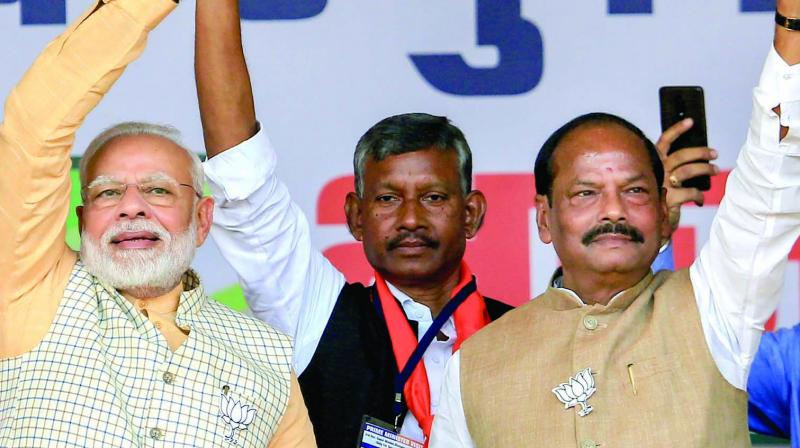 Ranchi: The economic slowdown could possibly emerge as the major threat for the ruling BJP in Jharkhand. Generally seen as one of the nation’s “poorest states”, the figures indicate that lack of industries and development have also contributed heavily to the rising unemployment in the state.

While unemployment continues to plague the state and the UNDP data indicate that nearly “46 per cent of the state is living in poverty”, one of the key issues being raised by the BJP is the National Register of Citizens. While the experiment of playing the nationalist and Hindutva card in Maharashtra did now work too well for the party, the BJP in Jharkhand remains confident of “returning to power”.

Despite this confidence, however the going could be a bit tricky in the terrain of Jharkhand for the BJP. There are whispers within BJP circles that chief minister

Raghubar Das has “failed to perform” Trouble is consistently gnawing at the saffron party’s heels. A few days back, BJP spokesman Praveen Prabhakar quit the party. He is expected to contest the Assembly polls from Nala on a National People’s Party (NPP) ticket. The BJP, however, brushed this off by claiming that “Praveen has no influence whatsoever in the state”.

Somewhat charged up after the turn of events in Maharashtra, the Congress is coming out with all guns blazing. This correspondent caught up with Congress’ campaign committee chief Subodh Kant Sahay. The party is hitting the ruling party where it thinks will hurt the most — over the economy. “Not even a single puncture repair shop has opened in the state under the BJP’ double engine ki sarkar (BJP’s Central and state governments),” he told this newspaper. Mr Sahay said: “The CM only signed MoUs... 90 per cent industries have shut down.” Incidentally, the Congress in the state is in alliance with the JMM and the Rashtriya Janata Dal.

The second arrow in the Congress’ quill is used to target the BJP over tribal-related issues. In the land of Birsa Munda, where nearly 26 per cent of people are tribal, the

Congress is trying to pin down the OBC chief minister. Mr Sahay said: “The chief minister is not a son of the soil... (He) no knowlege about tribal customs or culture.”

The Congress is also trying to take advantage over the ongoing “Pathalgarhi movement”, which considers a gram sabha as an autonomous unit. It seeks to challenge the right of the Indian state to govern tribal areas without violating the law.

Protests, known as the Pathalgarhi Movement, are now spreading rapidly and the government has cracked down on the agitationists. Mr Sahay spoke of sedition cases on 15,000 tribals being filed by the BJP government during the crackdown. The chief minister, however, claimed that only 36 tribals were arrested.

Regardless of the Oppositon attacks, BJP spin doctors are seeking a “perfect blend of local and national issues”. For this, the party is yet again relying on master strategist Amit Shah and its main vote-catching machine — Prime Minister Narendra Modi.