Congress announces a series of welfare measures for the families affected by the coronavirus outbreak in the state. 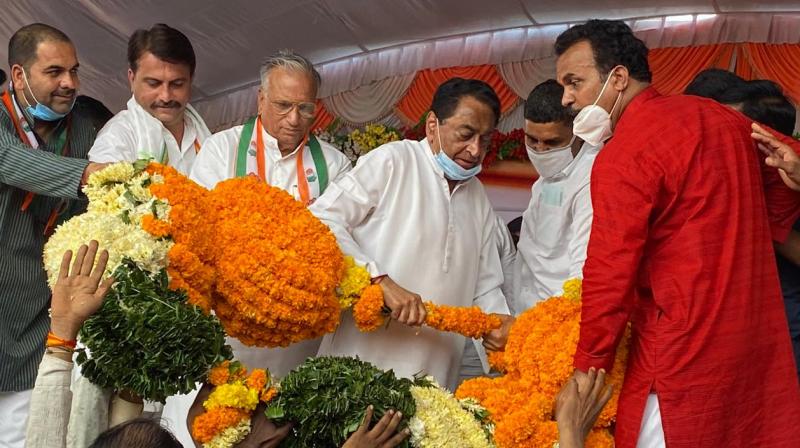 Former CM Kamal Nath at a rally in Dewas. (Twitter)

Bhopal: Congress, which was ousted from power in Madhya Pradesh in March this year following revolt raised by 22 party MLAs against the then chief minister Kamal Nath, has decided to play the pandemic card to return to power in the November 3 by-elections to 28 Assembly constituencies in the state.

The party has released poll manifesto for the crucial Assembly by-polls, announcing a series of welfare measures for the families affected by the coronavirus outbreak in the state.

Nearly 1.33 lakh people in MP have contracted the virus which has so far claimed lives of 2,336 people.

"We have decided to provide government jobs to a member of each family which has lost its earning member due to  COVID-19, if our party returns to power in the ensuing assembly by-elections in the state," former minister and senior Congress leader PC Sharma said on Saturday. The party has also declared to release adequate compensation to the families whose members have been infected by the virus.

The party has pledged to make the state free of pandemic if Congress returns to power in MP in the ensuing Assembly by-elections.

Interestingly, Congress released ‘Bachan Patra’ or poll manifesto for each of the 28 Assembly constituencies that are going to by-elections in the state.

The poll manifesto has also promised cheap electricity at Rs 100 per month per household if the party returned to power in the Assembly by-elections in the state.

Congress has strength of 88 in the 230-member MP Assembly and needs to win all the 28 Assembly seats to gain majority in the house to form the government in the state. However, the party leadership is confident that Congress would be able to form government with the support of its erstwhile allies, 4 Independents, 2 Bahujan Samaj Party (BSP) MLAs and one Samajwadi Party (SP) legislator, if Congress managed to secure even 21 out of 28 Assembly seats going to by-elections on November 3.