US, Taliban push for peace

The US, which invaded Afghanistan, wants to withdraw thousands of troops and turn the page on its longest-ever war. 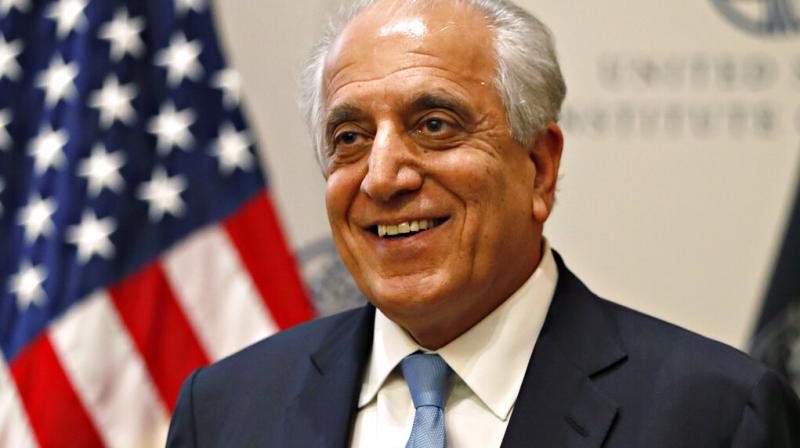 The talks, now in their eighth round, began on Saturday with no end date issued publicly. (Photo: AP)

Doha: The US and the Taliban were thrashing out elements of a deal to bring a close to Afghanistan's 18-year conflict on the second day of renewed talks in Doha on Sunday.

The US, which invaded Afghanistan and toppled the Taliban in 2001, wants to withdraw thousands of troops and turn the page on its longest-ever war. But it would first seek assurances from the insurgents that they will renounce Al-Qaeda and stop other militants like the Islamic State group using the country as a haven.

The talks, now in their eighth round, began on Saturday with no end date issued publicly.

A Taliban source told AFP efforts had been made to organise a direct meeting between US envoy for Afghanistan Zalmay Khalilzad and Taliban co-founder Mullah Baradar, who heads the movement's political wing.

The men have met previously, as recently as May. A coalition led by Washington ousted the Taliban in late 2001 accusing it of harbouring Al-Qaeda jihadists who claimed the September 11 attacks against the US that killed almost 3,000 people.

But despite a rapid conclusion to the conventional phase of the war, the Taliban have proved formidable insurgents, bogging down US troops for years.

Washington is hoping to strike a peace deal with the Taliban by September 1 -- ahead of Afghan polls due the same month, and US presidential elections due in 2020.

US President Donald Trump told reporters at the White House on Friday that "we've made a lot of progress. We're talking".

In another sign of progress, the Afghan government has formed a negotiating team for separate peace talks with the Taliban that diplomats hope could be held as early as later this month.

The Washington Post reported Thursday that an initial deal to end the war would see the US forces in Afghanistan reduced to as low as 8,000 from the current level of around 14,000. In exchange, the Taliban would abide by a ceasefire, renounce Al-Qaeda, and talk to the Kabul administration.

"After 19 years, President Trump has made it very clear that his desire is that we develop a diplomatic resolution that permits us to reduce the resources that are located there... while simultaneously ensuring that Afghanistan never again becomes a platform where a terrorist can strike the United States," US Secretary of State Mike Pompeo said Sunday during a visit to Sydney.

An Afghan official hinted last week that the government of President Ashraf Ghani was preparing for direct talks with the Taliban, the details of which have yet to be announced.

"We have no preconditions to begin talks, but the peace agreement is not without conditions," Ghani wrote in Pashto on his Facebook page on Friday ahead of the talks. "We want a republic government not an emirate," he said, a challenge to the Taliban which has insisted on reverting to the "Islamic Emirate" name Afghanistan bore under its rule.

"The negotiations will be tough, and the Taliban should know that no Afghan is inferior in religion or courage to them."

The thorny issues of power-sharing with the Taliban, the role of regional powers including Pakistan and India, and the fate of Ghani's administration also remain unresolved.

The latest US-Taliban encounter follows last month's talks between influential Afghans and the Taliban which agreed a "roadmap for peace" -- but stopped short of calling for a ceasefire.

Kabul resident Somaya Mustafa, 20, said her country desperately needed a peace deal -- but only one in which the Taliban "accept women and their achievements".

"It is a total mess in our country right now. And if it continues, women will suffer more than anyone else," she said. The United Nations has said that civilian casualty rates across Afghanistan matched record levels last month, following a dip earlier in the year.