Union Health Minister Dr Harsh Vardhan assured them that it is in interest of doctors, medical students, patient as well as ordinary people. 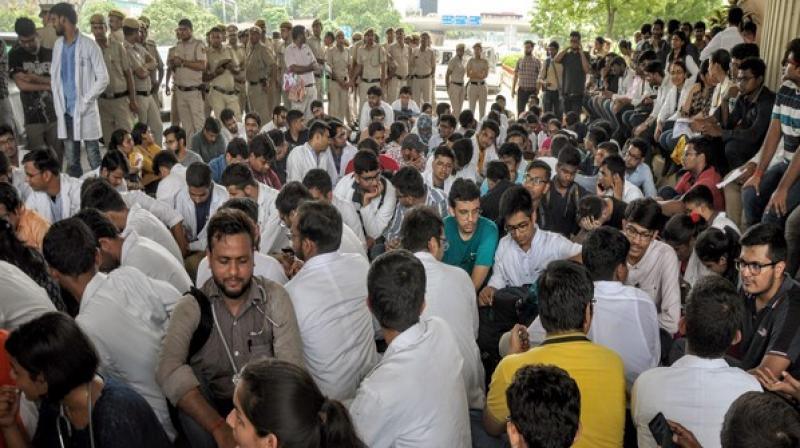 ‘I have appealed doctors to call off the strike so that patients should not face any difficulty in availing healthcare facilities,’ Dr Harsh Vardhan further said on the NMC Bill. (Photo: ANI)

New Delhi: Agitating doctors of All India Institute of Medical Sciences (AIIMS) here on Sunday announced to call off their four-day-long strike against the newly introduced National Medical Commission Bill.

They called off the agitation after Union Health Minister Dr Harsh Vardhan assured them that the Bill is in the interest of doctors, medical students, patients as well as the ordinary people.

A delegation of AIIMS' Resident Doctors Association met the minister and shared their apprehension over certain provisions of the Bill.

After the minister clarified their doubts and misunderstanding pertaining to the Bill, the executive committee of RDA-AIIMS decided to resume all services with immediate effect.

"Today morning, I met RDA representatives of Safdarjung and AIIMS. I have clarified their doubts and misunderstanding related to the NMC Bill. I have explained to doctors that NMC bill is one of the biggest reforms in the medical education sector which would be a blessing for 130 crore population of the country," tweeted Dr Vardhan.

"I have appealed doctors to call off the strike so that patients should not face any difficulty in availing healthcare facilities," he further said.

The doctors' body said: "We were also assured by the minister that representatives of RDA and students unions AIIMS (New Delhi) will be consulted before framing of regulations of the NMC Bill vide section 57."

"In this regard, a GBM of RDA-AIIMS was convened and the executive committee of RDA AIIMS conveyed the decision of withdrawing the strike and resuming of all services by the resident doctors with immediate effect."

"If the bill cannot be amended in the present situation, it was also requested that as per Section 4 (3) (g) Director AIIMS, New Delhi, should be made Ex-Officio member of the NMC at least in its first term," it said.

Healthcare services were badly affected due to the strike in the national capital with thousands of patients turning away in despair.

Doctors had expressed concerns over ambiguity in some of the provisions of the Bill including uncertainty over NEET-PG and concept of community health providers.

Doctors of Safdarjung Hospital, another major public health provider in the city, will continue their protest.

"We will make our decision tomorrow at the GBM, which will be attended among others by the RDA representatives," Prakash Thakur, RDA-president at Safdarjung Hospital, told ANI.