War of words break out between Vishwanath, Siddaramaiah

Both Siddaramaiah and Vishwanath started their political career around the same time. 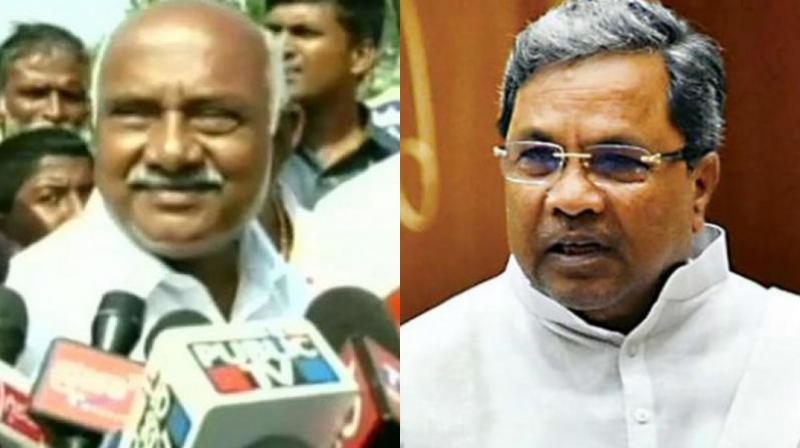 A bitter war of words broke out between Congress leader Siddaramaiah and the outgoing JD(S) state president A H Vishwanath on Thursday, However, the latter stepped down. (Photo: File)

Bengaluru: A bitter war of words broke out between Congress leader Siddaramaiah and the outgoing JD(S) state president A H Vishwanath on Thursday, However, the latter stepped down.

While Siddaramaiah ridiculed him for his failure to do 'Adhyakshagiri' (presidency) for even six months, Vishwanath slammed him for his "inability" to coordinate well despite being the coordination committee chairman of the ruling coalition partner, the Congress and the JD(S).

Vishwanath passed the baton to the new incumbent H K Kumaraswamy a month after resigning from the post owing moral responsibility for the partys drubbing in the Lok Sabha election. While resigning, Vishwanath had also hit out at the Congress for the coalitions poor performance in the election.

The JD(S) leader had also held Siddaramaiah responsible for the failure of the alliance in the election and said the coordination committee headed by Siddaramaiah failed to coordinate to bring out a common minimum programme of the coalition government of Congress and JD(S).

Reacting to the allegations, Siddaramaiah said, "What has he to say when he resigned owing to his failure to discharge his duty? How long he was the state president? He could not do Adhyakshagiri for six months and he is talking about others!"

Vishwanath shot back, saying, "Whether I continued for three months or six months but you (Siddaramaiah).. You ensured that the state presidents of both the parties were out of the coordination committee. Arent you ashamed of talking like that?

Earlier, Siddaramaiah tweeted, "H Vishwanath, who resigned as president after not being able to handle his presidency properly for six months, is always trying to hide his weakness by questioning the strengths of others. I have sympathy for him." Vishwanath appealed to Deve Gowda that the new state president H K Kumaraswamy should be included in the coordination committee.

Both Siddaramaiah and Vishwanath started their political career around the same time.

Siddaramaiah was earlier in the JD(S) and Vishwanath in the Congress. After Deve Gowda expelled Siddaramaiah, Vishwanath was instrumental in bringing him to the Congress fold. However, differences cropped up between the two leaders forcing Vishwanath to part ways.

Vishwanath then joined the JD(S) and won the assembly election on JD(S) ticket from Hunsur constituency in Mysuru.