55% cast votes in sixth phase of UP elections 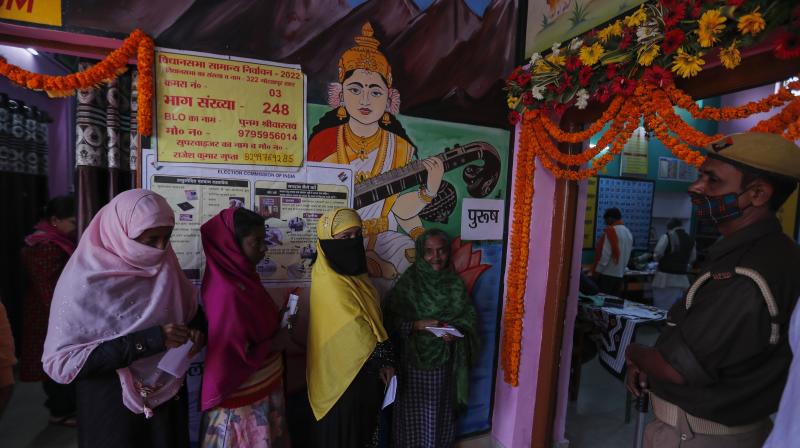 Lucknow: More than 55 per cent voting was recorded in the sixth phase of the Uttar Pradesh assembly polls on Thursday.

The prominent faces among the 676 candidates for 57 seats spread across 10 districts in this phase included Chief Minister Yogi Adityanath from Gorakhpur Urban and state Congress president Ajay Kumar Lallu from Tamkuhi Raj.

The final tally will be released by the poll authorities later, officials said.

With this, voting for 349 of the total 403 assembly seats has been completed. The final phase of polling in the remaining 54 seats will be held on March 7.

Around 2.15 crore people were eligible to vote in this phase. The voting started at 7 am and continued till 6 pm.

In the 2017 assembly polls, the BJP had won 46 of the 57 seats.
Till 5 pm there was about 53.31 per cent polling, according to the Election Commission of India's Turnout app.

Interacting with reporters after casting his vote, the chief minister said the BJP will get 80 per cent votes and the rest 20 per cent will get divided among the opposition.

Swami Prasad Maurya, who was a minister in the Adityanath government and had quit the BJP to join the Samajwadi Party, contested from Fazilnagar where polling was held on Thursday, besides Leader of the Opposition in the state assembly and Samajwadi Party leader Ram Govind Chaudhary from Bansdih.

The ministers whose electoral fortunes were sealed in the voting machines in this phase included Surya Pratap Shahi from Pathardeva, Satish Chandra Dwivedi from Itwa, Jai Pratap Singh from Bansi, Shree Ram Chauhan from Khajani and Jai Prakash Nishad from Rudrapur. The campaigning for this phase had witnessed the political parties going for an all-out attack against each other.

Prime Minister Narendra Modi attacked the BJP's rivals by tagging them as dynasts, who he claimed can never make India capable or empower Uttar Pradesh and Congress general secretary Priyanka Gandhi Vadra had rebutted by saying the BJP is only against her family, which did not bow down before it.

Samajwadi Party chief Akhilesh Yadav in his electioneering had accused the BJP of hatching a conspiracy of ending reservation and “selling” government entities to the private sector.