UP polls: Will sympathy vote secure win for Aman Mani? 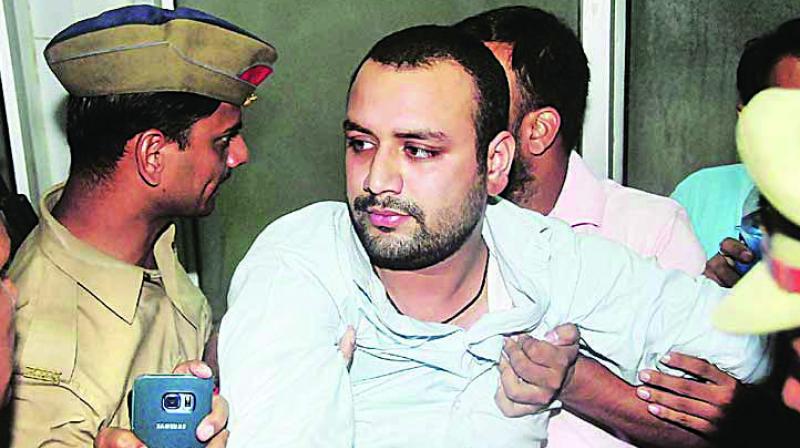 Nautanwa (Maharajganj): Voters’ sympathy in this constituency bordering Nepal tends to flow from behind the bars.

In 1989, Amar Mani Tripathi, known then as an “underworld sharp shooter”, made a successful transition to politics after winning Laxmipur Assembly segment (now Nautanwa). Having narrowly escaped a murderous assault on himself, he built his campaign around the promise that he would “either survive or be killed” if elected to power.

Twenty-eight years later, Nautanwa finds itself surrounded by a similar campaign, with none other than his son Aman Mani Tripathi, lodged in Dasna jail on charges of murdering his wife Sara, working up his way to challenge what his two sisters say is a “conspiracy by our rivals”.

“Our parents have been convicted (Amar mani and Madhu Mani are serving life term for the murder of a poetess in 2003) and now our brother is also in jail. We are in your court to seek justice. If you vote for our brother, he may get justice. With the entire family behind bars, you can imagine how we are coping,” the sister duo, Tanushri and Alankrita, campaigning for the jailed candidate who has been denied parole by the court, tell people as they leave behind their high-paying jobs to embark on this challenge of “bailing out” their brother.

And the “sisters’ situation” appears to have struck a chord in the constituency where people often turn to “local toughs” after facing trouble at the hands of the policemen.

“I can imagine how tough life must be for them. I will vote for Aman Mani, not because he is a good candidate but because of his sisters,” says Adhikar Singh, a businessman in Mumbai who is home for the polls.

Ashok Tripathi, a family associate, says the “mood” in Nautanwa is “different”. “If a leader is in jail, it is a symbol of honor for the people. The trend, which started with late Virendra Pratap Shahi winning in 1981, continues to date.” It is this “mood”, and what the rival camp alleges is “glorifying of criminals by the media”, that has turned Aman Mani into a “frontrunner” in this election.