Travelling in an SUV, Modi concluded his massive road show by offering prayers at the Kaal Bhairav temple in Varanasi. 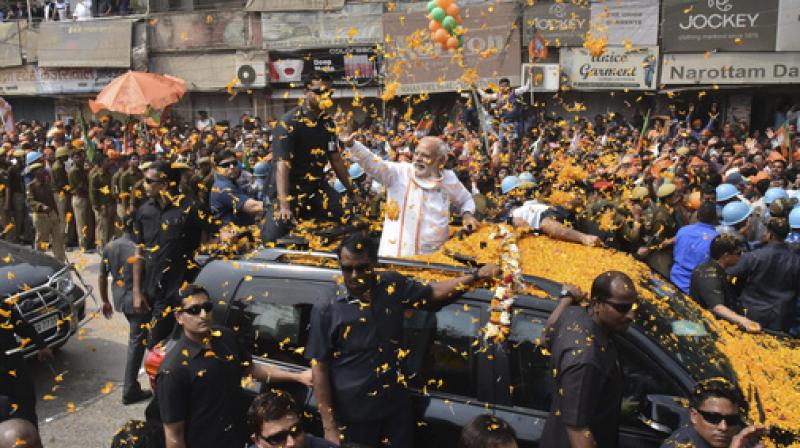 Prime Minister Narendra Modi waves to supporters as he campaigns for his party in the Uttar Pradesh state elections in Varanasi. (Photo: AP)

Modi hit the campaign trail in his parliamentary constituency of Varanasi on Saturday by embarking on a road show from the gate of Banaras Hindu University.

Travelling in an SUV, Modi concluded his massive road show by offering prayers at the Kaal Bhairav temple in Varanasi.

Huge crowd gathered on the streets to catch a glimpse of the Prime Minister. People were seen on both sides of the road, standing on balconies and rooftops of buildings. Supporters also raised slogans shouting ‘Har har Modi, Ghar ghar Modi’ and showered flowers at him.

According to reports, Congress and Samajwadi party supporters also showed up and waved their party flags at Bhadaini area. They shouted slogans supporting Akhilesh Yadav and Rahul Gandhi and Modi supporters responded with louder chants.

Modi also garlanded the statue of freedom fighter Pandit Madan Mohan Malaviya, who was also the founder of the BHU.

The Prime Minister is scheduled to address another election rally in Varanasi.