India   Politics  04 Feb 2022  Owaisi fired upon on way to Delhi from UP; escapes unhurt
India, Politics

Owaisi fired upon on way to Delhi from UP; escapes unhurt 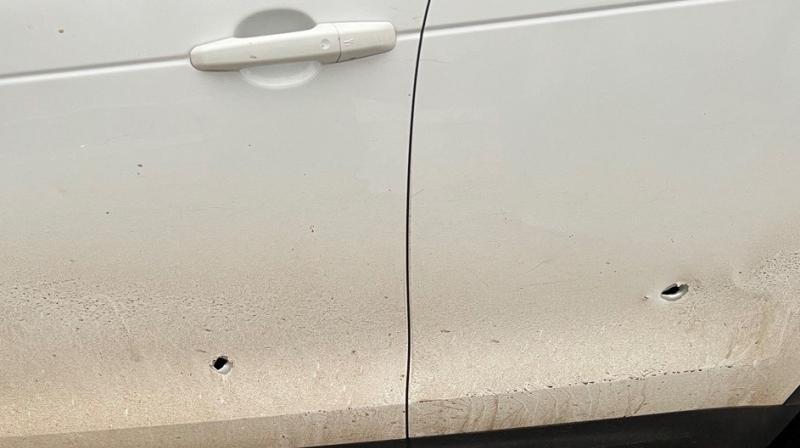 Owaisi shared picture of the bullet marks on his car. (Photo: Twitter/@asadowaisi)

New Delhi/Hyderabad: AIMIM chief Asaduddin Owaisi on Thursday said he was fired upon while he was heading for Delhi after campaigning for his party candidates in the Uttar Pradesh Assembly polls. No one was injured in the incident that took place at about 6 pm.

“Three to four rounds of bullets were fired upon my vehicle near Chhajarsi toll plaza when I was returning from an election-related event in Kithaur, Meerut. The incident was a well-planned conspiracy, but I escaped without injuries,” Owaisi tweeted, adding, “We are all safe. Alhamdu'llah.”

The Chhajarsi toll plaza is on the Hapur-Ghaziabad stretch of National Highway 24, and is about 55 km from Ghaziabad.

According to an additional SP of Hapur, police arrested one Sachin, a resident of Noida, following the incident. "A 9 mm pistol was recovered from him and he was taken into police custody. An investigation is underway,” the ASP said.

“We heard a huge bang. One was firing from a 90-degree angle and another was right opposite my door. Behind my car were my party members accompanying me in another car. They hit one of the shooters,” said the AIMIM leader.

He said the tyres of his vehicle were punctured and he left for Delhi in another vehicle.

Owaisi requested the Election Commission of India to order an independent inquiry into the incident. "It is the responsibility of the UP government and the Modi government to conduct an inquiry. I will also meet Lok Sabha Speaker Om Birla on this matter," said Owaisi, who is also the Hyderabad MP, after tweeting the video clippings from the toll plaza.

In Hyderabad, as the news spread there was mild tension at the AIMIM head office at Darusalam  but party leaders put on a brave front. MIM senior leader and MLA Mumtaz Ahmed Khan said, "We will not be cowed down by such attacks on our leader." He said such attacks were not new to the party and that it had made many sacrifices during the last 65 years.

Party activists rushed in to hear more about the firing on Owaisi’s convoy in Meerut.
Some of them were worried that their leader was injured. They got aggressive when cops asked them to vacate the ground. A little later they left the party office after confirming that Owaisi was safe.

Meanwhile, the ruling Telangana Rashtra Samiti in Telangana, close to the AIMIM, condemned the attack. TRS working president and IT minister Rama Rao responded via a Tweet, “Glad you are safe Asad bhai. Outrageous & utterly reprehensible. Strongly condemn this act of cowardice.”