However, the by-elections in the 28 Assembly constituencies recorded an impressive polling of 65.39 percent 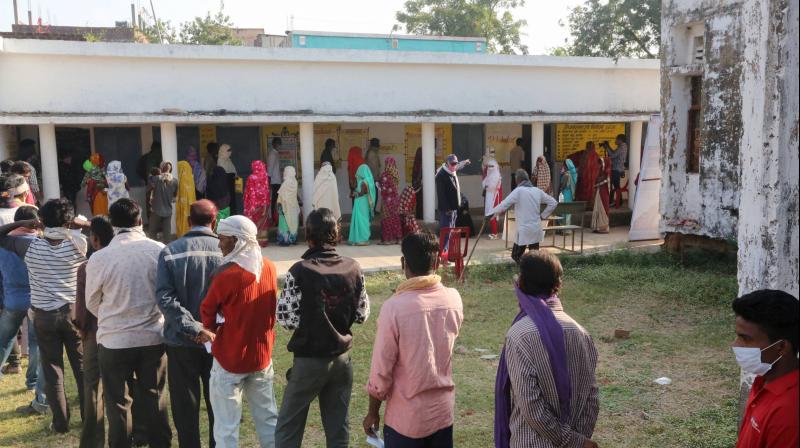 Raisen: People stand in a queue to cast their votes during the Madhya Pradesh Assembly bypolls, amid the ongoing coronavirus pandemic, in Raisen district, Tuesday, Nov. 3, 2020. (PTI Photo)

Bhopal: Incidents of firing and booth capturing marked the Assembly by-elections in Madhya Pradesh on Tuesday.

However, the by-elections in the 28 Assembly constituencies recorded an impressive polling of 65.39 percent despite the coronavirus epidemic.

Gwalior-Chambal region where 16 Assembly seats went to by-elections on Tuesday however witnessed low turnout of voters.

Four people were arrested in connection with the incident of firing at Jatabar polling booth.

However, police was trying to identify the miscreants involved in the incident of firing at Pura.

In another incident, miscreants stormed the polling booth in Lolai village under Mehgaon Assembly constituency in Bhind district and tried to snatch away the electronic voting machine.

However, the polling officials in the booth foiled their attempt to capture the booth. Later, the miscreants fled the spot.

The incident disrupted polling in the booth for some time. Polling resumed after police took control of the situation.

Meanwhile, police lodged a FIR against state minister Gopal Bhargav for campaigning in Bajna on Monday night in violation of model code of conduct.

By-elections to 28 Assembly constituencies in the state necessitated the resignation of 25 Congress MLAs and demise of 3 other legislators.

Results of the Assembly by-polls are scheduled to be declared on November 10.