Siddaramaiah, G Parameshwara and DK Shivakumar are said to be playing their cards with central leaders to be Oppn leader. 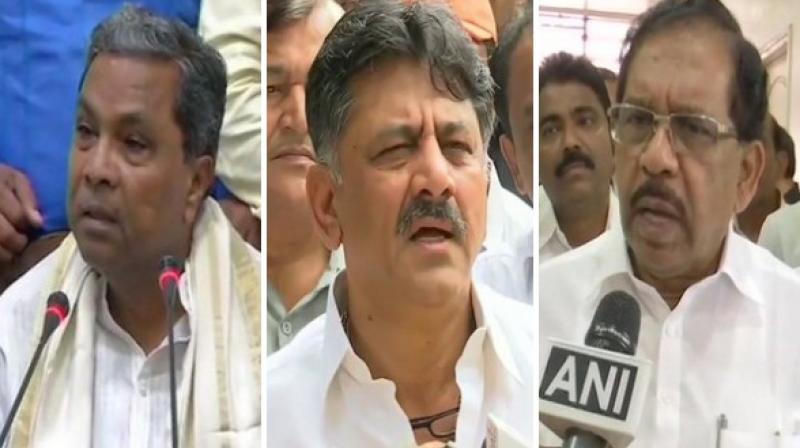 Most of the leaders of the party want Siddaramaiah as the Leader of Opposition as he is strong and hails knowledge of finance and other issues of the state, a party leader said. (Photo: ANI)

Bengaluru: An internal fight is going on within the Congress party in Karnataka over the Leader of Opposition post in the state Assembly, said a senior Congress leader on condition of anonymity.

Senior party leaders Siddaramaiah, G Parameshwara and DK Shivakumar are said to be playing their cards with central leaders to be the opposition leader in the Assembly.

Siddaramaiah, as Chief Minister has completed a full term of five years and has a good name among the people of the state, the senior Congress leader said.

But, on the other side former Deputy Chief Minister Parameshwara and Shivakumar are too in race for the post.

While Karnataka Congress is gearing up to fight by-polls if all disqualified MLAs fail to get their post in the Supreme Court, on the other side all three senior Congress leaders are trying all their options to get the post of Leader of Opposition.

Most of the leaders of the party want Siddaramaiah as the Leader of Opposition as he is strong and hails knowledge of finance and other issues of the state, a party leader said.

Shivakumar is indirectly focusing to be the opposition leader, while Parameshwara, who led the party at the time of two state legislative elections, is also very much keen to get the post, the party leader added.

Congress workers are keen to see Siddaramaiah as opposition leader.

Fifteen disqualified Congress-JD(S) MLAs had on Thursday moved the Supreme Court seeking quashing of erstwhile Karnataka Speaker KR Ramesh Kumar's order disqualifying them for the term of the present Assembly.

The petition, filed through advocate Shubhranshu Padhi, also sought setting aside of the Ramesh's July 28 order rejecting their resignations.

On July 29, two Congress MLAs had approached the court against Ramesh's decision.

All the disqualified MLAs cannot contest elections until the expiry of the term of the 15th Legislative Assembly.