The apex court had reprimanded the Bihar government over the deaths of children across the state due to AES. 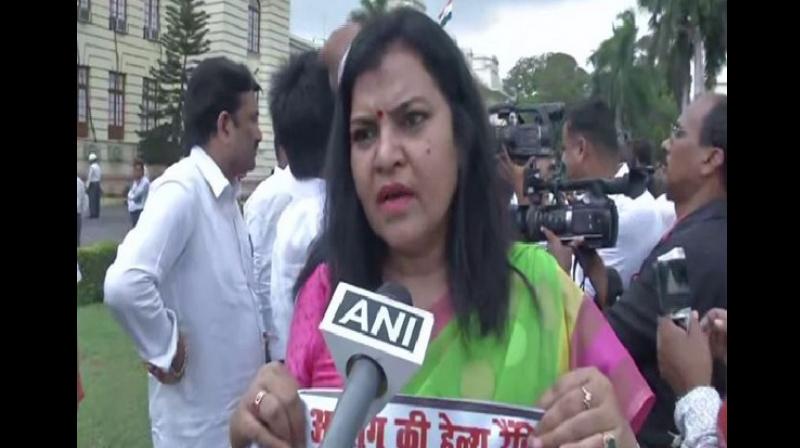 During the Monsoon session, health minister had dismissed the criticism against the government on the issue. (Photo: ANI)

Patna: The Rashtriya Janata Dal (RJD) on Wednesday protested at the Legislative Assembly against Bihar Health Minister Mangal Pandey and demanded his resignation following the outbreak of Acute Encephalitis Syndrome (AES) which has claimed lives of over 100 children in the state.

RJD leaders and workers raised slogans against Pandey, expressing objection over the affidavit about the medical facilities provided in the hospital submitted in the Supreme Court by the Bihar Chief Minister Nitish Kumar-led government on Tuesday.

"The way children are dying in Muzaffarpur shows the incapability and failure of the Bihar government. Pandey has failed to handle his Ministry well. There are no nurses, doctors and even lab technicians in the state hospitals. They are bringing doctors from outside the state. Now, they have submitted an affidavit in the court, in which they are trying to justify the deaths of Bihar children," a female protestor said.

BJP MP Gopal Narayan Singh also hit out at the Nitish government for not paying attention towards the infrastructure of medical colleges and facilities in the hospitals.

"From Lalu ji's time till today there has been no improvement in the condition of medical colleges in Bihar. There is a shortage of doctors in the hospitals since Lalu's time and no government has ever paid heed to these issues. Filing affidavit in the Supreme Court does not solve anything, it is a just the weakness of the Bihar government," he said.

On June 24, the Supreme Court had expressed "serious concerns" over the rising number of deaths due to the disease.

The apex court had reprimanded the Bihar government over the deaths of children across the state due to AES.

The top court had also asked the state government to file an affidavit on the concerns raised regarding the nutrition, hygiene and adequacy in the hospitals.

During the Monsoon session on June 28, Pandey had dismissed the criticism against the government on the issue.

As many as 137 children have died in Muzaffarpur due to the outbreak of encephalitis.