In a clear warning to BJP leaders, PM says ‘arrogance’ will invite punishment. 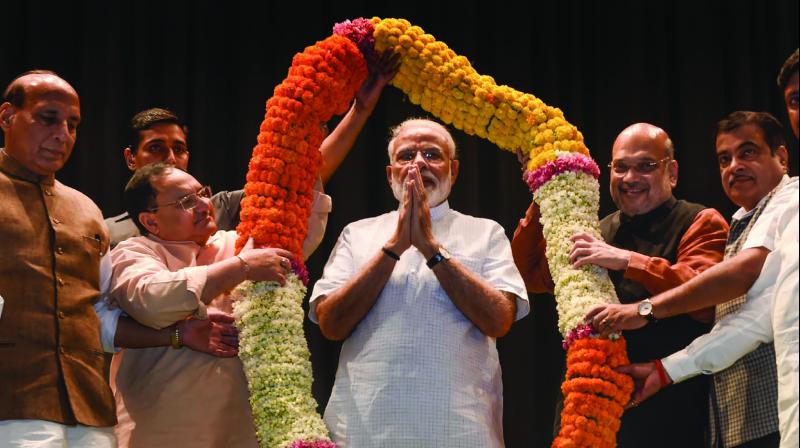 New Delhi: Taking serious note of senior BJP leader Kailash Vijayvargiya’s MLA son Akash assaulting a municipal corporation official, Prime Minister Narendra Modi on Tuesday cracked the whip, saying it was “unacceptable, no matter whose son”, and that “arrogance and misbehaviour cannot be tolerated”. Addressing the first meeting of the BJP parliamentary party after the massive victory in the Lok Sabha polls, Mr Modi said “if somebody behaves in such a way, then action should be taken against him”. Though the PM did not name anyone, it was apparent who was he referring to, as the video of the incident went viral on the social media and the BJP had to face severe criticism over it. After the incident, Akash Vijayvargiya was arrested and sent to judicial custody but later got bail. The first-time MLA from Indore-3 constituency was garlanded by his supporters as he stepped out of jail.

Sources said BJP general secretary (organisation) Ram Lal held a meeting with Mr Kailash Vijayvargiya and then met the party’s working president, J.P. Nadda, over the issue. The BJP, sources said, could take some serious action against the MLA, especially as the PM himself had expressed unhappiness over it.

After the meeting, BJP MP and spokesperson Rajiv Pratap Rudy said the PM was very upset and said that nobody has any right to “misbehave” or “show arrogance”.

“Whoever it may be, whoever’s son he may be... such arrogance, misbehaviour cannot be tolerated and action should be taken against them... manmaani nahi chalegi,” said the PM while addressing party MPs. When asked if the PM also suggested disciplinary action be taken, he answered in the affirmative.

“He said if somebody behaves in such a way, then action should be taken against him. He made his feelings clear,” Mr Rudy said.

Sources said Mr Modi also made a reference to BJP MLA Akash Vijayvargiya’s brazen defence of his attack on officials with a cricket bat with the boast “pahle nivedan, phir aavedan, phir danadan” (first request, then application, then attack), saying that such conduct was totally unacceptable.

“If somebody commits a mistake, there should be a sense of regret as well,” he said. Mr Modi, sources said, also disapproved of the fanfare with which BJP leaders had received him after he was released from jail and suggested that the party will take action.

The Prime Minister said BJP leaders have toiled hard for generations to bring the party success, and that such arrogance brings it a bad name.

Earlier, the parliamentary party felicitated the PM for the party’s thumping majority in the Lok Sabha polls. BJP president Amit Shah and working president J.P. Nadda were also felicitated. It was also the first time that party veterans, including L.K. Advani and Murli Manohar Joshi, were not present. Also, one of party’s prominent women faces and an exemplary orator, Sushma Swaraj, was not there. While Ms Swaraj had herself opted out of the Lok Sabha polls, the veterans had to abide by the party’s 75-year age bar.

Mr Modi also asked party MPs to ensure their presence in Parliament during the ongoing session, and added that they should also dedicate themselves to the people’s  service so that they are known for what they have done for the masses. He expressed his unhappiness at the poor attendance of party MPs when the triple talaq bill was introduced in the Lok Sabha.