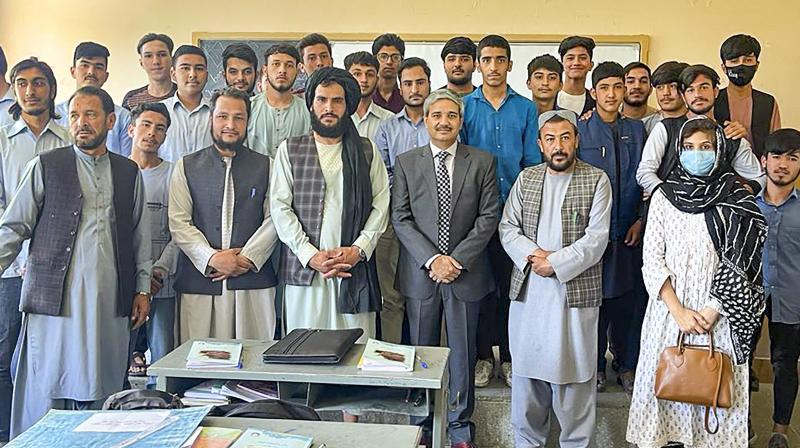 New Delhi: In a major step by New Delhi aimed at engaging with the Taliban regime which is in power in Afghanistan and containing Pakistan’s influence there, a visiting team led by senior diplomat J.P. Singh held talks in Kabul on Thursday with senior Taliban leaders, including the regime’s “foreign minister”, Amir Khan Muttaqi. The team headed by Mr Singh, who is joint secretary PAI (Pakistan, Afghanistan, Iran) in the MEA, will “oversee the delivery operations of Indian humanitarian assistance to Afghanistan”, New Delhi announced on Thursday. Photographs of the visit showed Mr Muttaqi and other senior Taliban officials taking notes during a meeting with Mr Singh.

New Delhi is also understood to have conveyed to the Taliban during the meeting that Afghan soil should not be used for terrorism against India by Pakistan-linked terror groups such as the Lashkar-e-Tayyaba and Jaish-e-Mohammed. The team will also meet representatives of international organisations which are involved in the distribution of the Indian humanitarian assistance, that includes so far 20,000 metric tonnes (MT) of wheat, apart from vaccines, medicines and winter clothing. The team will also visit other places outside Kabul “where Indian programmes and projects are being implemented”. India does not officially recognise the Taliban regime.

This is the first-ever talks between India and the Taliban that have taken place in Kabul since the Taliban seized power in August last year, though India had engaged last year with Taliban leaders in Qatar’s capital Doha as well as in Moscow on a few occasions. Given the sensitive nature of the visit and the Afghan security scenario, the MEA declined to say how many members the team comprises, the number of days of the visit or which other places specifically outside Kabul they will visit. But photos showed Mr Singh had visited the Chimtala electricity sub-station close to Kabul that was built by India.

It is understood that at this stage that there is no plan for recognition of the Taliban as the Afghan government by India. New Delhi continues to recognise the Afghan diplomats in New Delhi led by Afghan ambassador Farid Mamundzay, who are the representatives of the erstwhile Afghan government headed by then-President Ashraf Ghani who fled the country when the Taliban took over. While the Taliban’s march to power last year was backed by Pakistan, tensions have arisen between the Taliban and Islamabad in the past few months due to continuous attacks on Pakistani soldiers by terror group TTP from Afghan soil.

It may be recalled that India had already begun the process of sending a total of 50,000 metric tonnes to Afghanistan as humanitarian assistance via the land route that passes via Pakistan, a gesture that has earned it tremendous goodwill among both the Afghan people and the Taliban. India has already sent several shipments of humanitarian assistance consisting of 20,000 MTs of wheat, 13 tons of medicines, five lakh doses of Covid-19 vaccines and winter clothing. Before the Taliban took over power last year, India had committed humanitarian and development assistance of over $3 billion (over Rs 20,000 crores) to Afghanistan, under which more than 500 infrastructure and development projects have been undertaken since 2001.

In a statement on Thursday, the MEA said: “A team led by Joint Secretary (PAI), Ministry of External Affairs, is currently on a visit to Kabul to oversee the delivery operations of our humanitarian assistance to Afghanistan.

During the visit, the team will meet representatives of the international organisations involved in distribution of the humanitarian assistance. In addition, the team is expected to visit places where Indian programmes/ projects are being implemented. The Indian team will meet the senior members of the Taliban, and hold discussions on India’s humanitarian assistance to the people of Afghanistan.”