He refrained from commenting on sensitive issues like article 370, article 35 A and Ram Janambhoomi, said it will be dealt by Home Ministry. 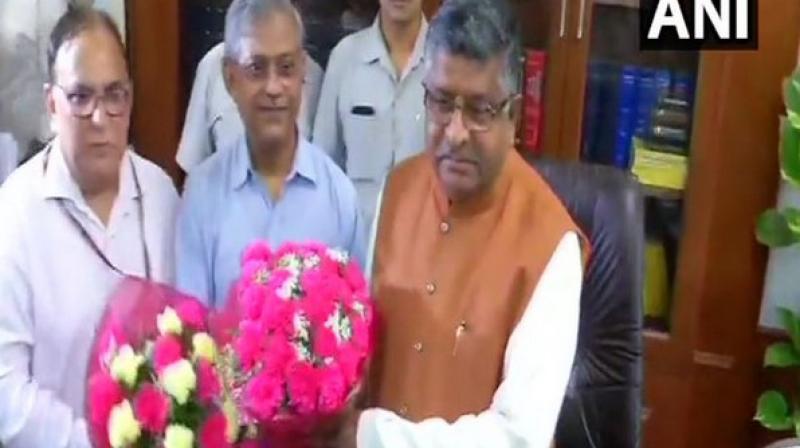 To a question, if the Triple Talaq Bill would be his priority, Prasad said, ‘Triple Talaq has been mentioned in our manifesto. Why not?’ (Photo: ANI)

"As Law Minister, I will not be a post office. The Law Minister and the Law Ministry have a role as a stakeholder, obviously giving due regard and respect to the collegium system," Prasad told reporters after assuming the charge.

The Law Minister's comments are significant as the five-judge collegium of the Supreme Court and the government have had opposing views over some appointments.

To a question, if the Triple Talaq Bill would be his priority, Prasad said, "Triple Talaq has been mentioned in our manifesto. Why not?"

He also highlighted that strengthening the judicial system will be amongst his priorities.

"Our Prime Minister always wanted to scarp old laws and we have already deleted 1500 of them. We will further revisit and fast track them," the law Minister told reporters.

Prasad, who has also been given the charge of Ministry of IT and Ministry of Communication, said that he "will try to make access to justice more effective by making a synergy of these departments through technology."

He refrained from commenting on sensitive issues like article 370, article 35 A and the disputed Ram Janambhoomi, saying that these issues will be taken care of by the Home Minister.