It cautioned the BJP-led government at the Centre to 'not play with the sentiments of the Tamil people'. 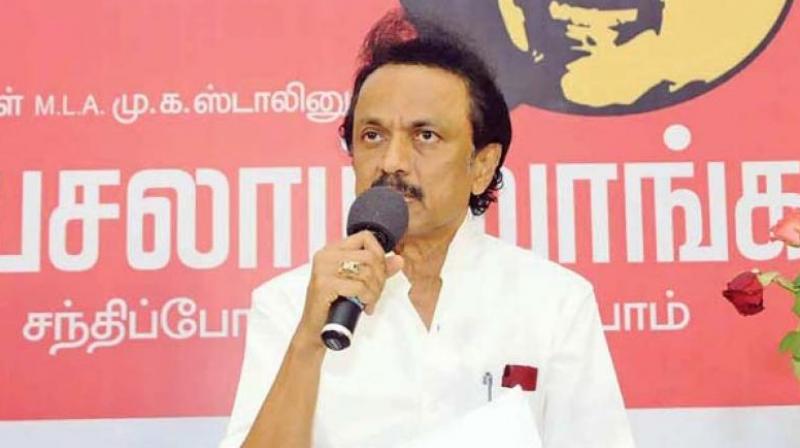 Chennai: Welcoming the Centre dropping the contentious clause of mandatory Hindi teaching, the DMK on Monday said it showed that late party patriarch M Karunanidhi was "living," apparently suggesting that it was a success to his legacy of opposing "imposition" of Hindi.

A revised draft education policy was issued Monday that did not have a mention of Hindi being compulsory amid controversy over the recommendation of an HRD Ministry panel to teach the language in non-Hindi speaking states.

After presiding over a meet of his party district secretaries, MPs, and MLAs, DMK president M K Stalin said in a tweet: "At a time when we are celebrating the birth anniversary of Thalaivar (leader) Kalaignar (late Karunanidhi), the Central government withdrawing the Hindi compulsory subject clause shows that Kalaignar is living."

"Let us guard mother Tamil always breaking up the hegemonic imposition of Hindi," he said.

The DMK is celebrating the 95th birth anniversary of Karunanidhi, who passed away last August. Hours before, the party meet said it would democratically fight tooth and nail any decision that may imperil the two-language formula in force in Tamil Nadu for five decades.

A resolution adopted in the meeting said: "This meet categorically states that the DMK will democratically fight tooth and nail any decision that may imperil the two language policy in force in Tamil Nadu."

It cautioned the BJP-led government at the Centre to "not play with the sentiments of the Tamil people".

Since 1968, after the DMK stormed to power in 1967 under the leadership of Dravidian stalwart and party founder C N Annadurai, a two-language formula of Tamil and English was being followed in the state.

The meet took note that after opposition erupted against the draft National Education Policy, Union Ministers had clarified that it was only a proposal and any decision will be taken only after consultations with stakeholders.

The Centre on Monday dropped the contentious provision of mandatory teaching of Hindi in non-Hindi speaking states, as it issued a revised draft education policy amid outrage over its earlier suggestion.

The DMK and other parties in Tamil Nadu had strongly opposed the three-language formula in the draft National Education Policy and alleged that it was tantamount to thrusting the Hindi language on the non-Hindi speaking states.

Another resolution wanted withdrawal of Hydrocarbon projects in Cauvery delta districts and immediately declare such districts as a "Protected Agricultural Zone," in deference to the views of farmers who oppose it.

The meet said it strongly condemned the "anti-farmer attitude," of the BJP government and the ruling AIADMK regime for backing the Centre on Hydrocarbon initiatives.

The DMK said such projects will lead to “desertification of the fertile delta region”.