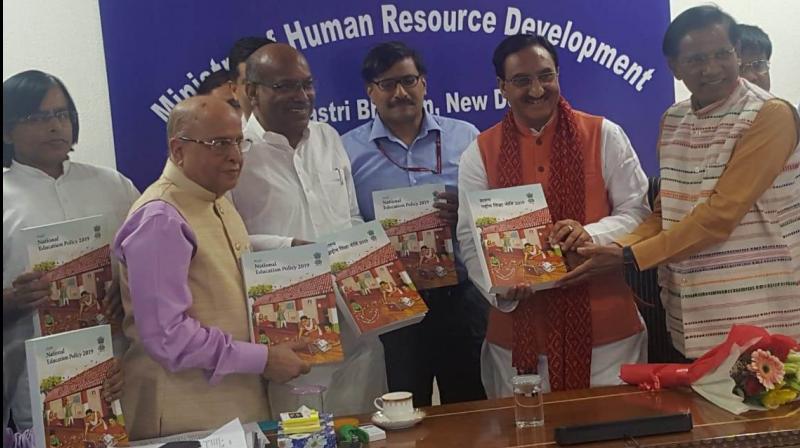 New Delhi: After a huge outcry and allegations of Hindi imposition by many states, the Centre on Monday made changes to the new Draft National Education Policy, making the language optional.

"In keeping with the principle of flexibility, students who wish to change one or more of the three languages they are studying may do so in Grade 6 or Grade 7, so long as they are able to still demonstrate proficiency in three languages (one language at the literature level) in their modular Board Examinations sometime during secondary school," read the tweaked version of the draft policy.

In the original Draft National Education Policy 2019, a three-language formula recommended the inclusion of English and Hindi besides mother tongue in the non-Hindi state, while the Hindi-speaking states were to include English and Indian language from other parts of India.

The draft policy had said multilingualism is a necessity of India as of much of the developed world and must be considered a boon and an opportunity for learning and expanding one's horizons rather than a burden.

In Tamil Nadu, leaders across party lines had said the state would not tolerate any imposition.

However, despite the raging controversy, the Centre had maintained that the policy was just a draft subject to changes and ensured that no language will be pressed upon.

"The committee was formed for drafting New Education Policy. That committee has given its report. The report of the committee is only received by the Ministry. That's not the policy. No language will be imposed on any state," HRD Minister Ramesh Pokhriyal Nishak had told ANI on Saturday.