He alleged that the opposition party is unhappy with India's security situation. 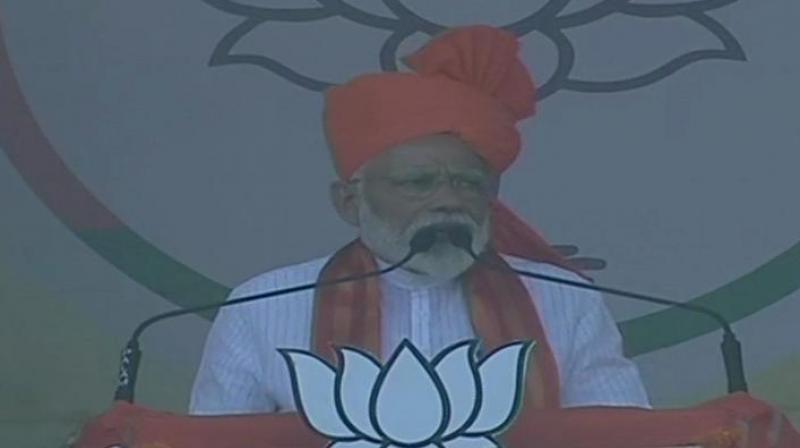 'Have I dealt with Pakistan's arrogance or not?', Modi asked the crowd. (Photo: ANI twitter)

Hindaun City: Prime Minister Narendra Modi on Friday said over Rs 1,000 crore had been released in advance for the states affected by Cyclone Fani.

Addressing an election rally here, he said the government was with the people in times of crisis. A detailed review meeting was held and he had been given the latest updates on Cyclone Fani, Modi said as the extremely severe cyclonic storm hit Odisha on Friday morning.

The prime minister also ramped up his attack against the Congress, saying the party is distraught about Jaish-e-Mohammed (JeM) chief Masood Azhar being declared as an international terrorist during the election and is questioning the timing of the announcement. He alleged that the opposition party is unhappy with India's security situation.

Instead of celebrating the decision of the United Nations (UN) designating the JeM chief as an international terrorist, the opposition party is questioning its timing, the prime minister said. "Should the UN ask the Congress, should it consult 'Madam' or 'Naamdar', before declaring him as a global terrorist?," he asked the gathering, in a mocking reference to UPA chairperson Sonia Gandhi and Congress president Rahul Gandhi.

Questioning the Congress's response to the development, he said the decision on the Pakistan-based terrorist was not taken by the ruling Bharatiya Janata Party (BJP). The world is talking about India, Modi said. "India's biggest enemy, Masood Azhar, who had been wounding India for several years, was declared an international terrorist two days ago," he said, adding that the UN declaring the JeM chief as an international terrorist was the third surgical strike on Pakistan. "Have I dealt with Pakistan's arrogance or not?", he asked the crowd.