Lower house has become part of my life now, Mahajan at review meeting for 17th LS

Addressing the media after the meeting, Mahajan said the preparedness for the 17th Lok Sabha has begun. 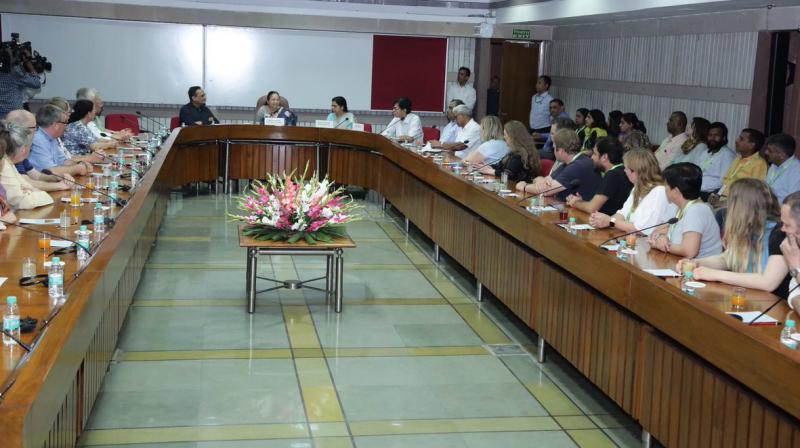 'I was member of Lok Sabha for three decades. I am getting feedback that Lok Sabha will miss me,' Mahajan said. (Photo: ANI I Twitter)

New Delhi: Lok Sabha Speaker Sumitra Mahajan Friday held a meeting of senior officials to review the preparedness for the commencement of 17th Lok Sabha and said the lower house has now become part of her life.

Last month Mahajan, an eight-time Lok Sabha MP, announced she did not want to contest the lower house elections anymore.

This is the first meeting of Mahajan with Lok Sabha officials after her decision. Addressing the media after the meeting, Mahajan said the preparedness for the 17th Lok Sabha has begun.

The first-time MPs would be given rule books and Constitution books, she said, adding separate reception will be set up at the railway stations and airports for the Parliamentarians.

A 24 hour facilitation centre will also be established in the Parliament building. As a temporary arrangement, about 100 rooms would be made available in the Western Court and no one would be staying in hotels.

She said 200 rooms would be booked in state houses till permanent housing arrangements are made for the MPs in the national capital.

To a question on how she felt she would not be part of the Lok Sabha anymore, Mahajan said having been a member of the Lok Sabha for the past three decades, it has become a part of her life now.

"I was member of Lok Sabha for three decades. I am getting feedback that Lok Sabha will miss me," she said.

The Lok Sabha polls are being held in seven phases and the results would be announced on May 23. The date of the oath-taking ceremony would be decided accordingly.