BJP West Bengal unit president Dilip Ghosh claimed that the couple 'was kidnapped and forced to join the Trinamool Congress.' 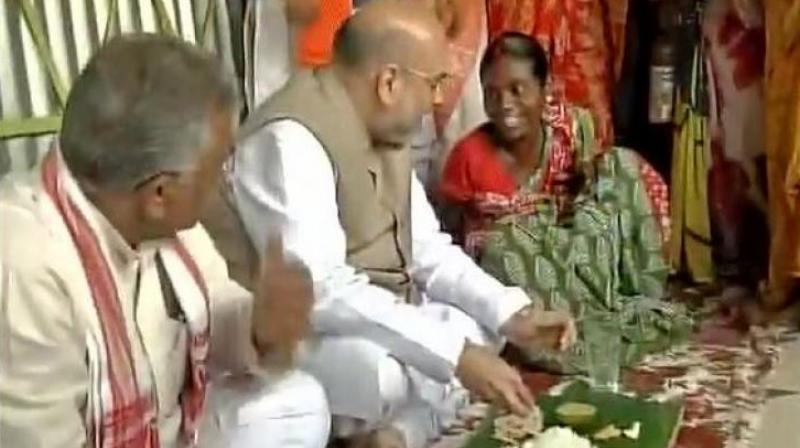 According to a report in NDTV, Tourism Minister, Gautam Deb happily welcomed Raju Mahali and his wife, Geeta after they offered to join the party.

In an effort to gain hold in West Bengal ahead of the local body elections in 2018 and also the Lok Sabha polls in 2019, Amit Shah last week embarked on a door-to-door visit of the state.

He had lunch at the house of a tribal couple at Dakkhin Katiajote village in Naxalbari area. Shah sat on the floor of Raju Mahali's house and had rice, moong dal, 'potol' fry, squash curry, salad and 'papad', served on a banana leaf.

BJP West Bengal unit president Dilip Ghosh who had also attended the lunch with Shah, claimed that the couple "was kidnapped and forced to join the Trinamool Congress."

Deb, who inducted the couple into the party retorted to the allegation saying that they had joined the party by their own free will, and that the party hadn't threatened or offered them any money.

Raju's wife, Geeta said they had joined Mamata's Trinamool because they liked her.

The couple also offered to serve lunch to Chief Minister Mamata Banerjee if she ever visited their place.

According to the report, the couple had gone missing on Tuesday, but were found taking shelter in a Trinamool worker's house so that the BJP could not get access to them.

The ruling Trinamool Congress party sees Shah’s visit as an attempt to make a dent in Bengal.