Raju and Geeta Mahali, who had hosted Shah on April 25, joined the TMC on Wednesday in the presence of Tourism Minister Gautam Deb. 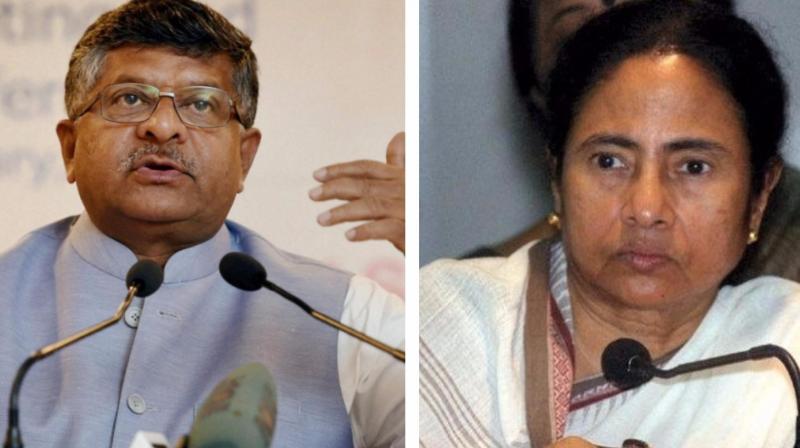 Union minister Ravi Shankar Prasad reminded West Bengal CM Mamata Banrjee of her struggle during the Left rule, claiming she cannot stop the march of democracy and people will support the saffron party.

New Delhi: The BJP on Wednesday accused the Trinamool Congress of abducting a tribal couple, who hosted its chief Amit Shah during his visit to West Bengal last week, and forcing them to join its ranks, terming it a text book case of revenge politics.

Union minister Ravi Shankar Prasad reminded West Bengal Chief Minister and TMC chief Mamata Banrjee of her struggle during the Left rule, claiming she cannot stop the march of democracy and people will support the saffron party "despite its pressure and violence".

At a press conference in the BJP headquarters here, he wondered if the TMC's "desperation" was caused by the CBI's probe into Saradha chit fund scam case and the Narada bribary sting allegedly involving several of its MPs.

"The investigation will not stop. It is based on evidence which is in the public domain. Bengal is seeing reckless violence and overpowering fear of the TMC," he said, adding
the ruling party could not tolerate a tribal couple offering lunch to the BJP president.

The "success" of Shah's visit has unnerved the TMC, he claimed.

Prasad said the BJP workers and others whom Shah met during his visit to Bhawanipur, Mamata's Assembly constituency, are also under "pressure".

Such violence and fear prevailed in the state during the Left rule and it is a tragedy that it remains so during the TMC rule as well, he said.

He also used the opportunity to accuse the Mamata government of appeasing one section of the society, a reference to Muslims, by the "misuse" of state power and noted
that it stopped religious processions during 'Ram Navami' and 'Hanuman Jayanti'.

Raju and Geeta Mahali, who had hosted Shah on April 25, joined the TMC on Wednesday in the presence of senior party leader and Tourism Minister Gautam Deb.

"I was inspired by the developmental work of Mamata Banerjee and that is why we have joined the TMC. Nobody has forced us to join the party," Geeta Mahali later said.

Prasad said the BJP was "deeply sad and hurt" over the development but was not least concerned.

Such tactics by the TMC cannot stop the BJP's expansion, he said.