The Congress would also request state governments to fill nearly 20 lakh vacancies in their departments. 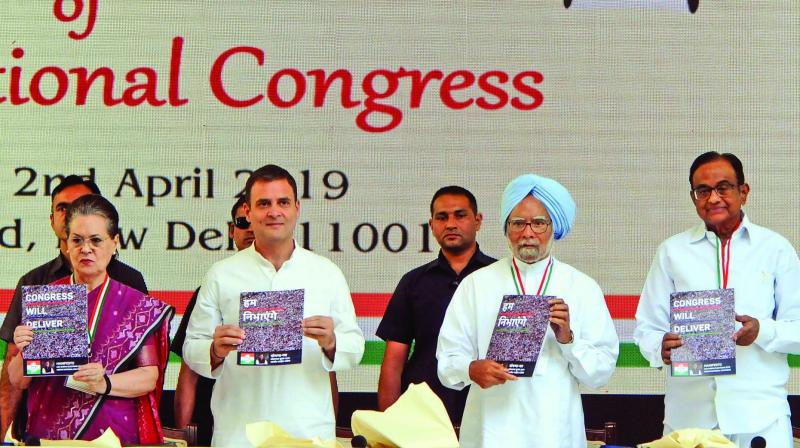 New Delhi: Keeping “Nyay” or the minimum income guarantee promise of Rs 72,000 per household per annum as the mainstay of its Lok Sabha poll manifesto, the Congress on Tuesday promised a slew of other welfare measures including a separate budget for farmers, filling up 24 lakh government vacancies, free education, improved healthcare and fixing a single moderate GST rate.

Releasing the a 55-page document titled “Congress Will Deliver”, party president Rahul Gandhi gave a new slogan based on the Nyay scheme, Garibi pe war, bahatar hazar, and said that on winning the parliamentary polls the party will come out with a separate budget for farmers, fill up 24 lakh government vacancies, allocate 6 per cent of GDP to education, ensure 50 more days of guaranteed jobs from current 100 days under the Mnrega, boost healthcare infrastructure and enhance safety of women.

“Our manifesto process reflects our commitment to a higher vision, that of listening to the ‘jan awaaz’. It is not the ‘mann ki baat’ of one individual but the collective voice of lakhs of people,” he said, in a preface of the manifesto, taking a dig at the ruling BJP which he said had spread hate across the country.

While the income guarantee scheme, Nyay, has been touted as a political game changer, the Congress manifesto has also fallen back on old style welfare economics to woo voters ahead of the general elections.

With this manifesto, Mr Gandhi said the Congress has offered to people ”the only national alternative — a distinct alternative — that is unwavering in its commitment to truth, freedom, dignity, self-respect and prosperity for our people”.

The manifesto also promised to investigate procurement of Rafale fighter jets and several other deals under the BJP government and said, if voted to power, the party will enforce anti-corruption laws without discrimination.

Apart from raising defence spending, the Congress vowed to make the office of National Security Advisor as well as the National Security Council accountable to Parliament, and define their powers under the law.

The party also promised to “revitalise” institutions like Reserve Bank of India, Election Commission, CBI, CIC, saying the Congress will restore their dignity, authority and autonomy while making them accountable to Parliament.

The party also promised to decriminalise defamation and sedition, amend laws that allow detention without trial, pass prevention of torture bill and amend Armed Forces (Special Powers) Act (AFSPA) to balance the requirements of security and the protection of human rights.

On Jammu and Kashmir, it said that nothing will be done or allowed to change the constitutional position on Kashmir and that enforcement of the AFSPA in the state will be reviewed.

Flanked by UPA chairperson Sonia Gandhi, former Prime Minister Manmohan Singh and former finance minister P. Chidambaram, the Congress president reached out to farmers and promised to waive off farm loans in all states like his party’s governments have done in Madhya Pradesh, Rajasthan and Chhattisgarh.

The Congress promised to put farmers on the path from “karz maafi” (loan waiver), to “karz mukti” (freedom from loans).

He also promised a separate budget for farmers, making farmers’ debt a civil rather than a criminal case that may entail imprisonment and setting up of a National Commission on Agricultural Development and Planning.

The highest priority was, however, reserved for jobs. The document promised to create a new ministry of industry, services and employment. “All the four lakh vacancies in Central government, Central public sector enterprises, judiciary and Parliament would be filled before the end of March 2020.

The Congress would also request state governments to fill nearly 20 lakh vacancies in their departments.

Mr Gandhi said that the Congress will allocate 6 per cent of GDP to education and strengthen government hospitals. The Congress promised that school education from Class I to Class XII in public schools shall be compulsory and free.

The party also promised to enact the Right to Healthcare Act and guarantee every citizen free diagnostics, out-patient care, free medicines and hospitalisation, through a network of public hospitals and enlisted private hospitals.

To woo women voters, the Congress promised a reservation of 33 per cent of seats in Lok Sabha and Assemblies, besides a separate investigative agency to investigate heinous crimes against women and children.”

On the economic front, the party said it will provide a fillip to private sector by incentivising businesses for jobs creation and employing more women. On GST tax, the Congress said it will radically simplify the GST regime with a single moderate rate of tax, zero rating of exports, and exemption for essential goods and services.

On defence, the Congress manifesto promised that it will reverse the trend of declining defence spending under the NDA government, and increase it to meet the requirements of the armed forces.”We will expedite all modernisation programmes of the armed forces in a transparent manner. We will improve social security, education and health facilities for our paramilitary corces and families,” the party said.

The party said that if voted to power, it will pass a new law in the first session of the next Lok Sabha to prevent and punish hate crimes such as “mob-engineered” lynching, stripping and burning if voted to power.

Alleging that sections of the media have “abused or surrendered their freedom” in recent times, the party pitched for omitting Section 499 of the Indian Penal Code and making ”defamation” a civil offence.