The PM is not only a regular practitioner of yoga but also a great believer in promoting, the traditional form of meditation and exercise. 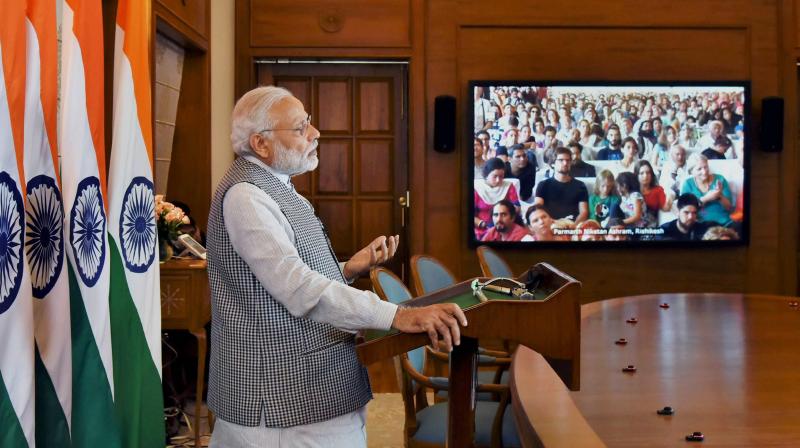 New Delhi: PM Narendra Modi again stressed the need to practice Yoga and said it shows the way for world peace and prosperity. He was addressing the gathering at week-long International Yoga Festival at Paramartha Niketan on the banks of Ganges in Rishikesh in Uttarakhand .

While speaking to the delegates, via video-conferencing, he said, “At a time when the world is grappling with the challenge of terrorism yoga shows the way for peace.”

The PM is not only a regular practitioner of yoga but also a great believer in promoting, the traditional form of meditation and exercise. The PM, in his speech said, yoga is not just a form of exercise but a way to attain peace through physical, mental and spiritual well being.

“Its prolonged and regular practice leads to higher consciousness where ‘me’ and ‘we’ merge together and become one,” the  PM said.

“Yoga expands one’s outlook from the confines of self to the society at large. It is a journey from “Aham (me) to Vayam (we),” PM added to loud cheers from the audience. Mr Modi told delegates, “today, when the world battles challenges posed by terrorism and climate change, yoga has become more relevant than ever before as it shows the way to peace.”

After the BJP-led NDA government came to power in May 2014, the Prime Minister Narendra Modi in his speech in UNGA proposed the idea of an International Yoga Day. Following the initial proposal UNGA held informal consultations and finally June 21st has been earmarked as International Yoga Day