Kundan Chandravat had earlier expressed regret and had retracted his statement. 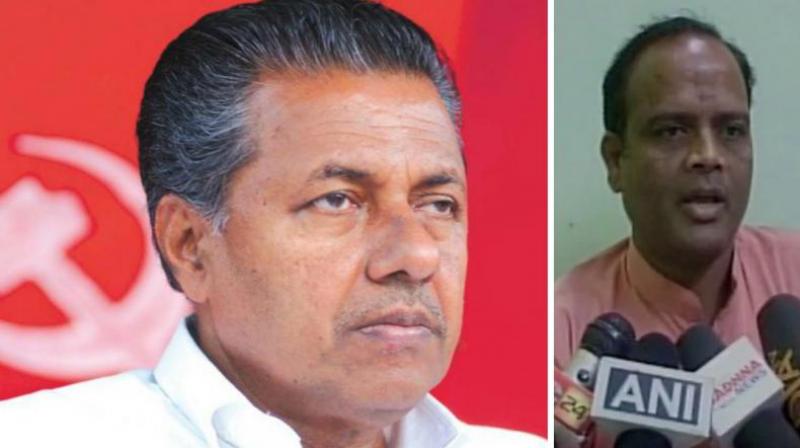 Ujjain: RSS leader Kundan Chandravat who created a political storm in Kerala with his remarks about its chief minister Pinarayi Vijayan was sacked from all positions in the RSS on Friday. Chandravat had earlier offered a bounty of Rs 1 crore to the person who brings him the head of the Kerala chief minister.

“Kundan who made controversial statement at Ujjain protest mtg has been relieved of his responsibility in RSS, (sic)” said a statement issued by the official Twitter handle of RSS. 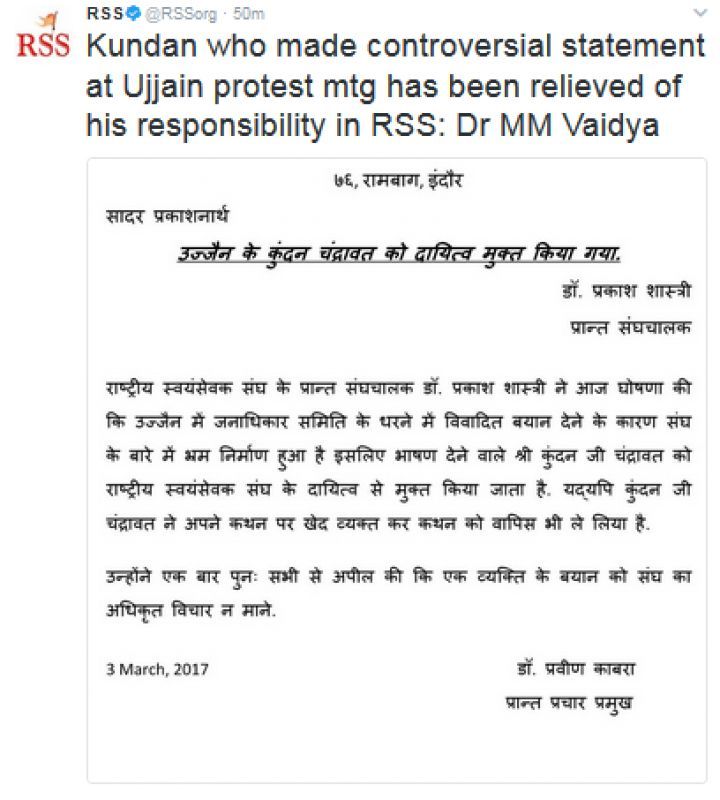 Chandravat, 'Sah Prachar Pramukh' (Joint Chief of Publicity) of RSS in Madhya Pradesh's Ujjain, announced the reward to avenge the killing of its workers in Kerala, but the Sangh had immediately distanced itself from the comments.

Facing massive backlash from all quarters, the leader said he regretted his statement.

"I was pained on the issue of murders of Swayamsevaks and therefore made an emotional statement. I retract it (statement) and express my regret," Chandravat said in a statement late Thursday night.

In a video, which went viral, Chandravat was purportedly seen saying that Kerala Chief Minister Pinarayi Vijayan is behind the killing of RSS workers there and he will pay Rs 1 crore to anyone who beheads him and brings his (Vijayan's) head to him.

He also claimed that 300 innocent people belonging to the RSS had been killed but the Kerala Chief Minister was turning a blind eye.

The RSS had condemned Chandravat's statement, stating the organisation did not believe in violence.

"The RSS strongly condemns such statement. The Sangh does not believe in violence. But we will continue to protest against attacks on our workers in Kerala in a democratic and peaceful manner," RSS national 'Sah Prachar Pramukh' J Nandakumar had told PTI in Delhi.

Vijayan, however, dismissed the threat to his life, saying such calls would not prevent him from travelling around, while Kerala's ruling CPI(M) and Congress sought the arrest of Chandravat for his outrageous comments.

Kerala has been witnessing a series of political clashes between the cadres of BJP-RSS and the ruling CPI(M),especially in the northern Kannur district from where Vijayan hails for a long time. Both parties have blamed each other for the cycle of violence which has claimed several lives on both sides.