UP will shock Akhilesh on March 11: Modi

The sixth phase of polling in Uttar Pradesh is to be held on Saturday and the last phase is on March 8. 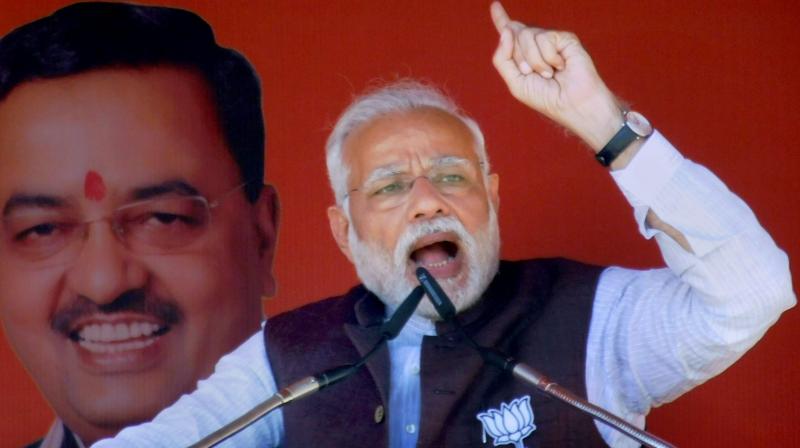 Mirzapur: With the high-stake UP assembly elections drawing to a close, Prime Minister Narendra Modi on Saturday said SP, BSP and Congress would get electric shocks on March 11 after declaration of the poll results.

Modi's remarks at an election rally here in the backward eastern region of Uttar Pradesh came amid war of words on supply of electricity in the state.

"On March 11, elections results will give electric current to SP, BSP and Congress," he said.

Read: This UP election is to celebrate 'mukti' from SP, Congress and BSP: PM

"Akhilesh has dared me to touch electric wire to find out whether power is really there or not. His new friend Rahul Gandhi during his khaat sabha at Madihan in Mirzapur, however, had touched the wire and told his party leader Ghulam Nabi Azad that there was nothing to worry as there is no power in the line," Modi recalled.

"This is the acceptance of your new friend. Do I need touch the wires any more? ... Akhileshji now people have spread such a current that will give shocks to SP, BSP and Congress on March 11," he said.

Modi said during Rahul's "khaat sabha" people had taken away "khats" as they knew the cots belonged to them and now the same people will ensure the defeat of Congress.

The sixth phase of polling in Uttar Pradesh is to be held tomorrow and the last phase is on March 8.

Alleging that the rate for every job is fixed in UP, Modi said, "If you want to lodge a police complaint or even if you don't want to get it lodged at a police station, it's fixed as to how much you have to give. Similarly for getting pensions, jobs and ration cards too, the rates are fixed."

Citing poet Ashok Chakradhar's poem on different types of corruption, Modi said the only remedy for this is to defeat the corrupt.

"If you want to get rid of this, you have to defeat the SP, the BSP and the Congress," he said.

Attacking BSP supremo Mayawati, Modi said she had taken stones from here for construction of her statues but when inquiry started, she said the stones were from Rajasthan.

"You tell me why she has so much hatred even for stones of Mirzapur. Why such people should be voted by you at all," he posed.

He asked people to ensure that the SP, the BSP and the Congress are wiped out from the district and no candidate of these parties makes it to the Vidhan Sabha.

Noting that the brass industry of the city was ruined by these parties, he said, "Had this industry been functional and had there been a proper power supply, the youths would not have been forced to move out to Gujarat and Maharashtra for employment. Youths did not get job in UP due to nepotism and casteism as well," he said.