Chidambaram also accused the Budget of cheating the farming community. 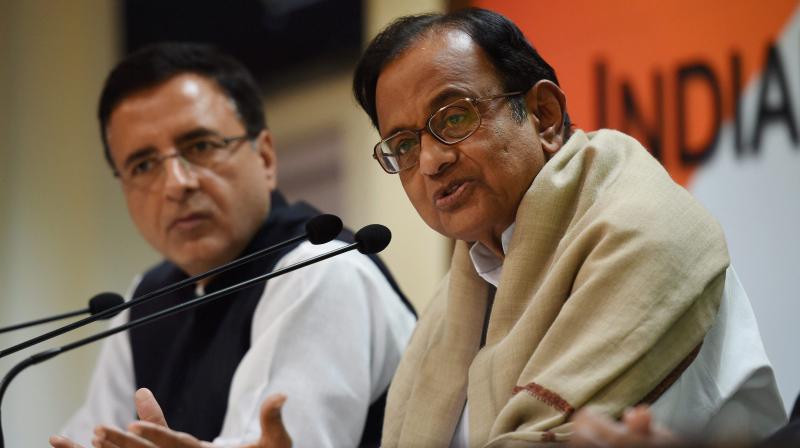 New Delhi: The Congress on Thursday launched a scathing attack at the Centre by terming the Budget a “damp squib”. Former finance minister P. Chidambaram spelt out ten points against the Budget and asked the government to respond.

In a left-handed compliment, he praised the finance minister for adopting a “tone of moderation” and not doing anything reckless or disruptive after the demonetisation policy of the government.

“Our conclusion on reading all the Budget documents was that the elaborate exercise has turned out to be a damp squib. It is a wasted opportunity... Altogether, I am disappointed that the government has not used the opportunity to push through bold reforms, revive aggregate demand and growth, and devise new strategies for job creation,” he told reporters.

Accusing the government of being “demoralised after demonetisation” Mr Chidambaram said, “There is nothing in the Budget that points to measures that will be taken to revive flagging growth.”

In the ten points raised by the Congress, the basic emphasis was on lack of job creation by the NDA government. Especially when it had promised 2 crore jobs every year. As per the latest report of the labour ministry, the job creation in 2016 is roughly about 1.5 lakh.

Mr Chidambaram said the government has done nothing in the Budget by way of new strategy or policy measures to revive investment and growth, which was badly affected after demonetisation. Striking a cautious note, he said the spillover effect of note ban decision would be felt in the next fiscal as well as in 2018-19.

The former finance minister added, “It is now widely accepted that growth rate of the Indian GDP has taken a hit. It will be worse. This period of lower growth will extend to 2017-18 and 2018-19.”

While noting that there is nothing in the Budget that points to measures to revive flagging growth or reviving investment, the former finance minister said that the country will pay a “heavy price” in terms of poor demand, lower sales, fewer jobs and closures of MSMEs.