The BSP won just two mayoral posts in Aligarh and Meerut, whereas, Congress and Samajwadi Party failed to win a single mayoral seat. 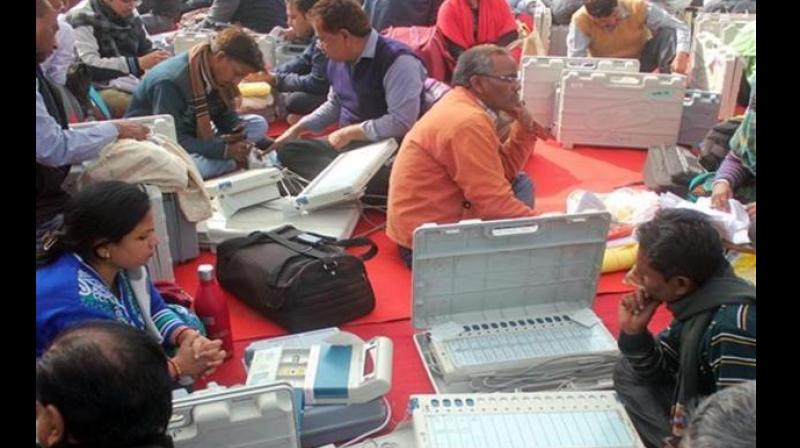 BSP and SP accused the BJP of tampering with the Electronic Voting Machines (EVMs) in the civic polls. (Photo: PTI | File)

They accused the BJP of tampering with the Electronic Voting Machines (EVMs) in the civic polls.

Earlier on Saturday, Mayawati challenged the BJP to remove the EVMs and start using ballot papers.

"If the BJP is honest and believes in democracy then they should discard the EVMs and conduct voting on ballot papers. The general elections are due in 2019. If the BJP believes people are with them, they must implement it. I can guarantee if ballot papers are used, the BJP won't come to power," Mayawati said.

The BSP won just two mayoral posts in Aligarh and Meerut, whereas, Congress and Samajwadi Party failed to win a single mayoral seat.

Akhilesh Yadav on Saturday took to Twitter to show that the BJP has won only in areas where EVMs were used.

BJP has only won 15% seats in Ballot paper areas and 46% in EVM areas.

Samajwadi Party leader Azam Khan said there was no tampering but a 'setting' in the civic polls.

Dismissing allegations, Union Finance Minister Arun Jaitley on Saturday tore into the opposition parties and said, "While the BJP has maintained its credibility, the Congress is slowly becoming extinct. The results haven't been out yet and they have already started making excuses for their defeat".