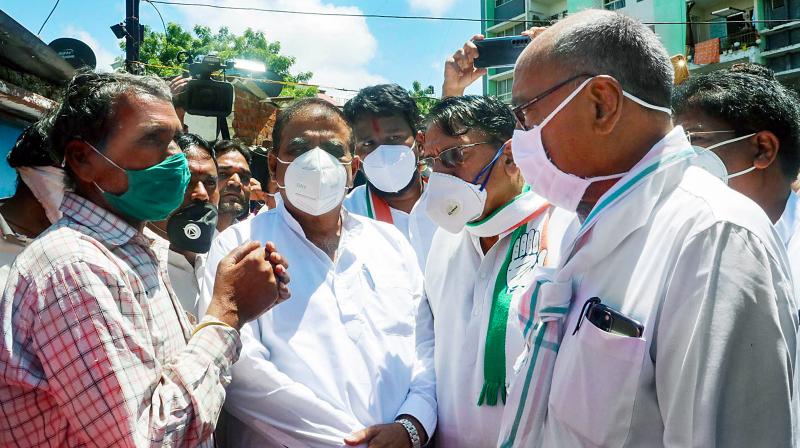 Senior Congress leader and Rajya Sabha MP Digvijay Singh interacts with residents during a visit to the site of a wall collapse in Damkheda locality, in Bhopal. — PTI photo

Ruling BJP and its principal rival Congress have begun preparations for the upcoming by-elections to 27 assembly constituencies in Madhya Pradesh, outcome of which may decide fate of Shivraj government.

The election commission has already announced that the by-elections in these constituencies, due by end of September this year, are going to be held ‘on time’.

Both the parties are expecting by-elections by the third week of October.

At least two dozen leaders and workers from both the parties have already been infected by the virus so far while campaigning for their respective parties in the poll-bound constituencies.

Some of them have recovered.

Prominent among the BJP leaders who have been infected by the virus were chief minister Shivraj Singh Chouhan, his ministerial colleagues Arvind Bhadoria, Tulsi Silwat and Gopal Bhargav, and BJP national vice-president Prabhat Jha.

Mr Choudhury has recovered, while other Congress leaders are recouping in the hospital.

“Coronavirus has created panic among the workers of both the parties hitting their campaigns hard”, Mr Pateria who is admitted to a covid-19 hospital here said.

BJP has already indicated to re-nominate the 25 former Congress legislators who have joined the party recently.

While 22 former Congress MLAs, loyalists of Jyotiraditya Scindia, resigned from the assembly and subsequently from party in March this year leading to fall of Kamal Nath government, three other Congress legislators followed them suit last month.

They joined the BJP. Scindia also switched over from Congress to BJP.

By-elections to two other assembly constituencies was necessitated following the death of the sitting MLAs.

Congress has also begun preparations for the by-elections to these constituencies.

“We have completed booth level meetings of party workers and leaders. Besides, we have also completed the exercise of preparing a panel of candidates for each of these constituencies”, Congress spokesman here Narendra Saluja said.