Jagan to resolve issues between Andhra and Telangana

Jagan has an amicable relationship with the Centre as well as with the Telangana government. 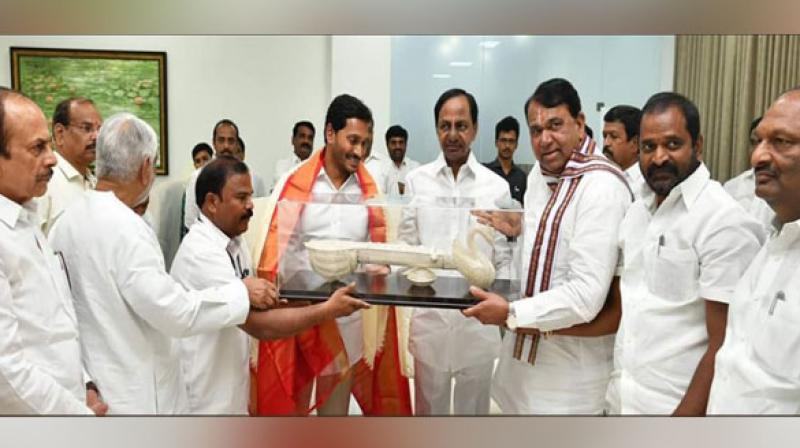 Amaravati: The new government in Andhra Pradesh has raised hopes of an amicable settlement of all contentious issues between the state and the neighbouring Telangana, which celebrated its sixth formation day on June 2, 2019.

In the last five years, there was more hostility than cordiality between the TRS government in Telangana, carved out of Andhra Pradesh, and the Telugu Desam Party dispensation in AP essentially due to political reasons.

Consequently, none of the issues — sharing of river waters and division of assets and liabilities among others — could be settled between the two Telugu-speaking states.

Last year, the TDP had even gone on a collision course with the central government. The governor, common to both the states, arranged a couple of meetings with the chief ministers and subsequently, a three-member ministers group was formed on each side to resolve the issues but no headway was made.

In the four years that it remained part of the NDA government at the Centre, the TDP failed to achieve much according to the provisions of the AP Reorganisation Act, 2014.

But now, the YSR Congress government headed by Y S Jaganmohan Reddy has begun with an advantage of having a non-confrontationist, if not friendly, relationship with both the TRS government and the Centre, springing hope of ending the impasse.

With Reddy at the helm, Telangana Chief Minister K Chandrashekar Rao too sounded positive over the settlement of outstanding issues with AP, particularly over sharing of river waters.

Rao, who attended the swearing-in of Reddy as AP chief minister on Friday, however, he did not publicly commit anything about the division of assets and liabilities between the two states.

"It will take some time but we are hopeful of a positive solution. We don't have a confrontationist stance and things will sure move forward," YSRC MP and party general secretary V Vijayasai Reddy told PTI.

Once the new chief minister settles down, he would open dialogue with the Telangana government, he added. Sources said Jaganmohan Reddy might hold a formal meeting with his Telangana counterpart later this month or early next month to set the process in motion.

Former chief secretary, I Y R Krishna Rao, who negotiated on behalf of AP with the Telangana government many times during his two-year term, said political willingness was required to resolve the disputes between the states.

It takes time after a state bifurcation for things to settle. But political willingness is important. Now, there could be a better climate between the two states and a solution to the long-pending issues is possible, Krishna Rao said.

As per a White Paper released by the AP government in December last year, there is a dispute over the division of assets worth Rs 1.97 lakh crore, related to government companies and corporations and state institutions, listed under Schedules IX and X of AP Reorganisation Act, 2014.

The Supreme Court, in 2015, passed an order in favour of Andhra Pradesh over the division of assets related to AP State Council of Higher Education, listed in the Schedule X. Till date, the Telangana government did not honour it even as the AP government filed a fresh petition over it in the high court.

The dispute over the division of properties of AP Bhavan in New Delhi also was not settled. AP is also aggrieved over the non-settlement of a debt liability of Rs 33,478 crore which should have been in Telangana's account that was passed on to the state post bifurcation.