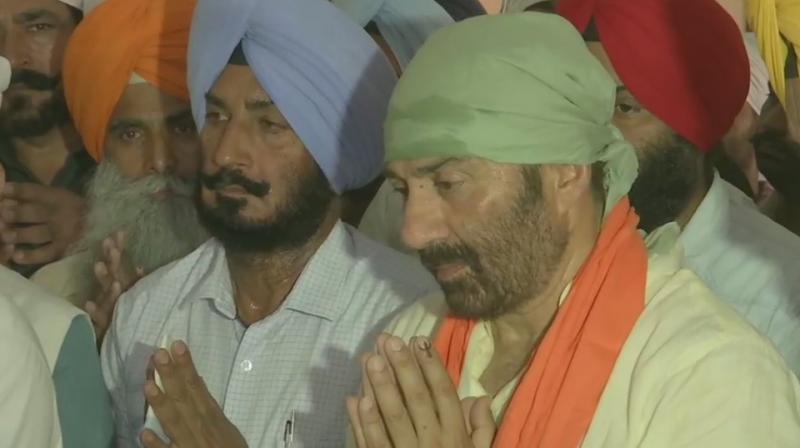 Accompanied by BJP leader Kamal Sharma, Deol offered prayers at the Gurdwara Dera Baba Nanak and had a glimpse of the Gurudwara Kartarpur Sahib in Narowal district of Pakistan through binoculars installed at 'darshan sthal' here. (Photo: ANI twitter)

The national film award winner for movies "Ghayal" and "Damini" is pitted against sitting MP and Congress candidate Sunil Jakhar, AAP's Peter Masih and PDA's Lal Chand in electoral fight from Gurdaspur seat. Accompanied by BJP leader Kamal Sharma, Deol offered prayers at the Gurdwara Dera Baba Nanak and had a glimpse of the Gurudwara Kartarpur Sahib in Narowal district of Pakistan through binoculars installed at 'darshan sthal' here.

Both India and Pakistan had agreed to build the Kartarpur corridor to facilitate devotees to offer prayers at the historic Gurdawra Darbar Sahib - the final resting place of the founder of Sikhism Guru Nanak Dev- in Pakistani town of Kartarpur with Dera Baba Nanak in Punjab's Gurdaspur district. He also went to Prachin Shiv Temple in Kalanaur in Gurdaspur to offer prayers. It was a tough time for security personnel to tackle the crowds who were keen to meet the Bollywood actor and get photos clicked with him at the Shiv temple.

For a brief period, Deol appeared through sunroof panel of his vehicle and accepted flowers bouquet and garlands from the people gathered to have a glimpse of him. Deol will take out a road show from here later in the day. It will pass through several areas including Pathankot, Bhoa and Sarna.

He returned to Gurdasur from Mumbai on Wednesday and met families of martyrs at Shadipur village in Dinanagar here. "I have already said that you stay in my heart. I want to work towards meeting all your needs and requirements. I am not saying just for the sake of making statement. I want everyone to be happy and have a smile on their face," Deol had said on Wednesday night. "Hindustan Zindabad hai, Zindabad rahega," he said before ending his speech.

All the 13 seats of Punjab will go to polls on May 19. Meanwhile, Congress nominee and sitting MP Sunil Jakhar Thursday dared Deol for holding a debate with him on issues concerning the Gurdaspur constituency. "Welcome back to Gurdaspur, @iamsunnydeol. Before you leave again for Mumbai, Would once again like to invite you to debate various issues concerning this border belt, whenever it is convenient for you," Jakhar tweeted.

Jakhar had won the seat in the 2017 bypoll which was necessitated after the death of Vinod Khanna in April that year.  Khanna had represented the seat four times in the Lok Sabha.