A 'rebel' who vows to protect people from 'dacoits in society' 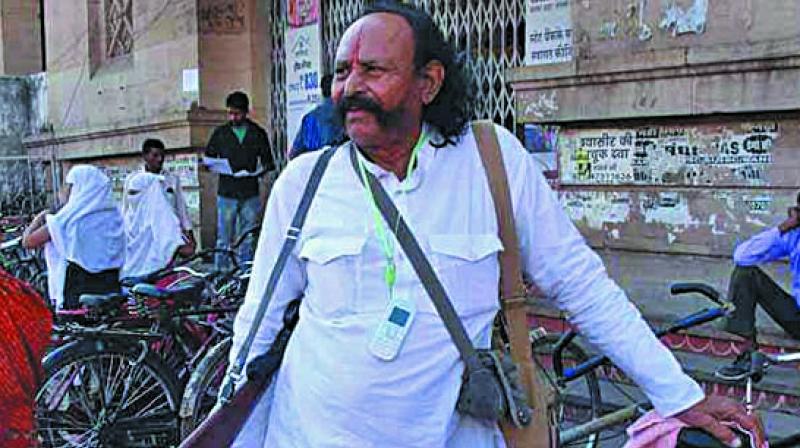 'I will win...my party is strong and I am getting good response wherever I go in the constituency,' Malkhan Singh claimed. (Photo: File)

Lucknow: His name used to send shivers down the spine in ravines of Chambal in Uttar Pradesh and Madhya Pradesh in the seventies. But the former dacoit now describes himself as a "baagi" (rebel) and vows to fight against 'dacoits in society' and stand rock-solid for their cause.

He is Malkhan Singh Rajpoot, 76, who is testing his electoral fortunes from Dhauhara constituency as Shivpal Yadav's Pragatisheel Samajwadi Party (Lohia) candidate.

"Mahaul accha hai...dhuan dhaar lad rahe hai" (The scenario is good...I am contesting solidly)," Malkhan, who was the uncrowned emperor of dacoits of Chambal in the 1970s, told PTI over phone when asked how his election prospects.

"I will win...my party is strong and I am getting good response wherever I go in the constituency," he claimed.

Asked about issues being raised by him, Malkhan, who was first picked up by police in 1964 when he was just 17-year-old under the Arms Act, said, "I will stand rock-solid for the cause of the people and save them from dacoits in society whom they face every day."

"Garibon, mahilaon par anyay aur atyachar ke khilaf khada rahunga," (I will stand against those who commit atrocities on poor and women)," he said.

"As a 'pehredar of Chambal', I took care of all irrespective of their caste. I don't carry any blot now," he said, recalling his past when he was known as a dreaded dacoit of Chambal.

"No one can meet injustice to anyone here. I will ensure that. They (people) will only get benefited by me as their representative," Malkhan said, when asked why people should vote for a 'dacoit', as he is perceived.

"I was not a dacoit. I was 'baagi', who took up gun for self-honour and self-protection. I know who are real dacoits and also know how to deal with them," he said.

People of his area say Malkhan hates being called a dacoit. They say he still evokes the Robin Hood image even outside the badlands of Chambal where he ruled for 15 years.

When asked as to why he selected Dhaurahara constituency and not any other seat in UP or in MP, Malkhan said, "It is democracy. Anyone can contest from anywhere. If our PM Narendra Modi can contest from Varanasi, why can't I?"

Malkhan and his gang were the most feared in the Chambal region and had a total of 94 police cases, including 18 cases of dacoity, 28 of kidnapping, 19 of attempt to murder and 17 cases of murder against them.

When his surrender was ultimately negotiated, Malkhan himself carried a price of Rs 70,000 on his head. Malkhan settled down in district headquarters of Shivpuri in Madhya Pradesh after his surrender before then MP chief minister Arjun Singh in 1982.

Locals say at the age of 76, the over six-foot tall Malkhan is still a rebel, but sans the American self-loading rifle that he used to flaunt. Nevertheless, he is campaigning with all guns blazing, kicking up dust in the villages braving the scorching heat.

In Dhaurahara, Malkhan had campaigned for Congress nominee Jitin Prasada in 2009 and helped him win. "I was assured a Congress ticket from Banda this time, but they ditched me," Malkhan said, when asked about his meetings with Congress leaders Jyotiraditya Scindia and Raj Babbar.

Malkhan is contesting against Congress candidate Jitin Prasada, BJP's Rekha Verma and opposition alliance candidate Arshad Iliyas Siddiqui (BSP). The constituency will go to polls on May 6 in the fifth phase of polling.