Modi also seemingly took a potshot at Pakistan, and said, "they can't even take care of themselves". 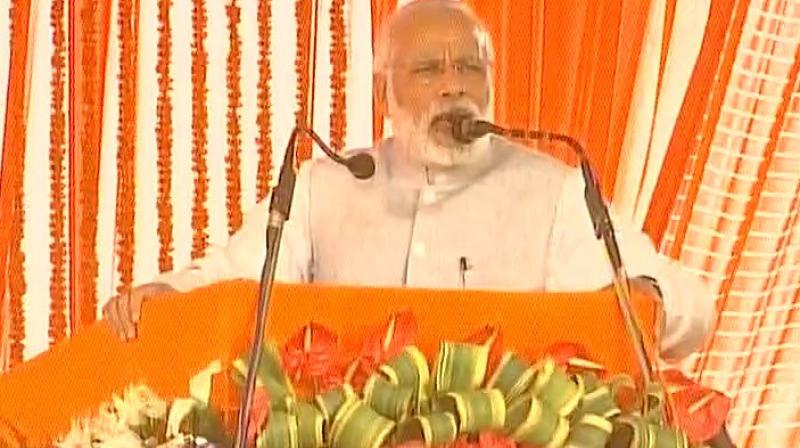 Udhampur: Sending out a message to them is guided youth of Kashmir, Prime Minister Narendra Modi on Sunday said "40 years of bloodshed" has not benefitted anyone and that they should choose tourism over terrorism to ensure the state's development and well-being.

He again invoked former Prime Minister Atal Bihari Vajpayee's slogan of 'Kashmiriyat, Jamhooriyat, Insaniyat (Kashmirism, democracy and humanity)' and said this "prime motto" will be used for taking the state to new heights of development and "no obstacle can stop us".

Modi, who was on a brief visit here to inaugurate the country's longest road tunnel between Kashmir and Jammu, used the occasion to tell the stone-pelters of the valley that stones can be used for better purposes – building infrastructure.

Addressing a rally here, he told the Kashmiri youth that if they ignore the "invaluable tradition of sufi culture", they would "lose the present and put your future into darkness".

In a veield manner, the Prime Minister also hit out at the rulers of Pakistan who are eyeing Kashmir, saying "they can't even take care of themselves".

He said his government was committed to ensure fast-paced development of Jammu and Kashmir, which would also tell the people living under "occupation" in the other parts of the state how they are being destroyed.

At the event attended by Governor N N Vohra, Chief Minister Mehbooba Mufti and some union and state ministers, Modi promised to stand shoulder-to-shoulder in the development of Jammu and Kashmir and sought the cooperation of the people in this regard.

The message was clearly for the youth who are indulge in stone-pelting in the Kashmir valley and thus risk their lives.

"I want to tell the Kashmiri youth, there are two paths in front of you which can determine your future -- one is tourism, the other is terrorism," he said.

"Over last 40 years, there has been lot of bloodshed. My own Valley has been blood-soaked, my Kashmir's beloved youth, my Hindustan's beloved youth. Nobody has benefitted from this bloodshed," the Prime Minister emphasised.

He said if the people of Kashmir had devoted the same 40 years to development of tourism, the valley would have been blessed with tourism of world class.

Modi said whenever the mention of Kashmir, Jammu and Ladakh comes, remembering Vajpayee was inevitable as he had given the slogan of 'Kashmiriyat, jamhooriyat and insaniyat'.

"Using the same prime motto, we will move ahead with harmony, with brotherhood, with strong will and determination for the brighter future of the youth," he said, amid repeated chants of "Modi, Modi'.

The Prime Minister said development will be pushed further in all three parts of Jammu and Kashmir state -- Kashmir, Jammu and Ladakh.

He showered praised on Mehbooba and her government, in which his party, the BJP, is a partner, saying more than half of the Rs 80,000 crore package given by the Centre over a year back has already been spent in such a short span of time.

"Otherwise the packages remain on the paper only," he said while complimenting the Chief Minister.

Modi said the state had the potential to have the highest per capita income and to realise this, the people need to walk with the government, shoulder-to-shoulder.

"Development is our only mantra," he said and emphasised the importance of 'Jan Bhagidari' (people's cooperation) and taking the youth along.

Talking about the 9-km-long 'Chenani?Nashri Tunnel', which provides an all-weather route and reduces the distance by 31 kms, the Prime Minister described it as a "fate line" for the state and said it will take tourism in the Kashmir valley to new heights.

He said nine such tunnels are planned for the state as part of infrastructure development.

"Yeh sirf infrastructure network nahi, yeh dilon ko jodne wala network hai (This is a network, not only of infrastructure, but to connect the hearts)."

"The tunnel not only reduces distance between Kashmir and Jammu, it is a long jump for the development of Jammu and Kashmir," the Prime Minister said.

Elaborating on his "fate line" comment, Modi said the tunnel will greatly benefit the people of Kashmir, particularly the farmers who would suffer losses because their produce like fruits and vegetables would perish due to prolonging of their journeys from the valley to other parts of the country.

"The (Kashmir-Jammu) highway would be closed for days due to landslides and as a result the produce of the farmers would perish before reaching the market. So this tunnel is a boon for the farmers. Now, their produce, their fruits, vegetables will reach Delhi in time and they will no more suffer financial losses," he said.

Another benefit of the world-class tunnel, he said, was that tourist flow to the Kashmir valley can increase as the travellers will no longer have to worry about getting stranded on the highway because of landslides.

Modi added that the tunnel will be a matter of discussion for environmentalists, not only in India but across the world, since it has been built by cutting through the mighty Himalayas.

"For the environmentalists, it is a big news and hope," he added.