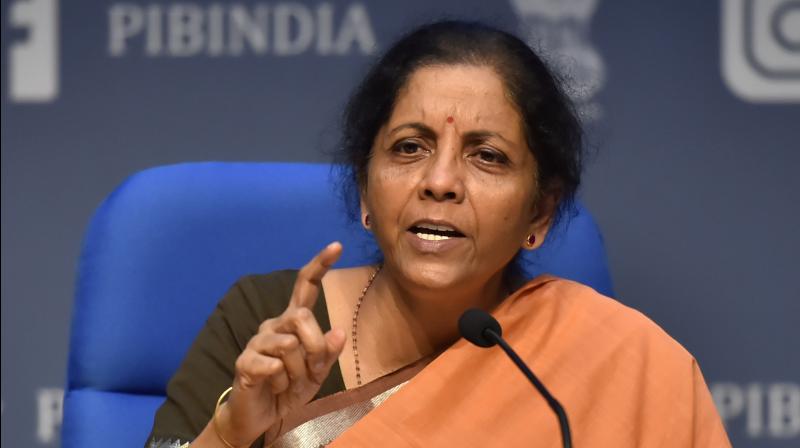 New Delhi: Against the backdrop of the Narendra Modi government facing the challenge of pulling the Indian economy out of an unprecedented recession while ensuring more resources to fight the worst pandemic in a century, finance minister Nirmala Sitharaman on Monday presented what was probably the toughest Budget yet for her government, in which she announced a jump in capital expenditure, more spending on infrastructure and doubling of the spending on health.

While Ms Sitharaman gave no particular relief for the middle class in terms of income-tax reliefs or exemptions, big sops were announced for the four poll-bound states -- Tamil Nadu, West Bengal, Kerala and Assam.

In a bid to boost the Covid-19 pandemic-hit economy that plunged into the deepest recorded slump, the Centre also raised the cap on foreign investment in insurance for the next fiscal year.

The stock market gave a massive thumbs up to the Budget, and for the first time in Independent India's history, the Sensex closed over 2,300 points higher on Budget day.

In her shortest ever Budget speech, read out from a tablet (as this was India’s first paperless Budget), Ms Sitharaman did not announce any changes in income-tax slabs, PPF limits and Section 80C exemptions, but strengthened the tax tribunals for the benefit of taxpayers in some way or the other. This comes despite experts asking for increased money in the hands of the salaried class to boost consumption and demand.
A significant relaxation to home buyers was given by announcing the extension of Rs 1.5 lakh deduction on payment of interest for affordable housing by a year. The Budget also focused broadly on vaccines, nutrition, infrastructure, education, farmers, the coming Assembly polls, disinvestment and private sector investment in the country. Besides, a host of substantial announcements were also made on disinvestment, including the IPO of Life Insurance Corporation (LIC), curbing bad loans for banks and opening up the insurance sector to private players.

Ms Sitharaman said: “The Budget preparation was undertaken under circumstances like never before... We are planning for health infrastructure spend which has gone down to the block level.” She also clarified that in no categories will the consumer pay more with respect to the agriculture infra cess. “This comes at a time when all of us decided to give impetus to the economy and that impetus, we thought, would be qualitatively spent and give necessary demand push if we choose to spend big on infrastructure,” she added.

“The areas of focus will be preventive and curative healthcare as well as well-being. The allocation is likely to be around Rs 2,23,846 crores, a 137 per cent rise from the previous Budget. Rs 35,000 crores has been allocated for the Covid-19 vaccination programme in FY22. Similarly, on capital expenditure, the outlay for FY22 has gone up by 34.5 per cent (vs FY21 BE) at Rs 5.54 lakh crores, and Rs 44,000 crores under capital expenditure will be given to the department of economic affairs in FY22. FY21 capital expenditure is seen at Rs 4.39 lakh crores,” she said.

Calling it a healthcare-centric Budget, Prime Minister Narendra Modi said even as it was presented amid unprecedented circumstances, it shows India’s confidence and will instil self-confidence. “The Budget has the vision of self-reliance and features every section of society.”

To satisfy farmers in the ongoing protests over the Centre’s three farm laws, he said the Budget focuses on increasing their income and several measures have been taken in this direction. “Farmers will be able to get loans easily. Provision has been made to strengthen the APMC markets with the help of the Agriculture Infrastructure Fund,” he said.

Elaborating on the Budget, the finance minister outlined “six pillars”, or proposals to strengthen the vision of Atma Nirbhar Bharat -- health and well-being, capital and infrastructure, inclusive development, reinvigorating human capital, innovation and R&D and “minimum government and maximum governance”. Though the Centre’s Budget got a thumbs-up reaction from both India Inc and the stock markets, most of the Opposition parties remained critical about it.

On relief to taxpayers, Ms Sitharaman said the government had left direct taxes unchanged, but took steps in direct tax incentives to ease compliance for taxpayers. “We proposed making it so that advance tax liability on dividend income shall arise only after payment of dividend. The Budget also looked at pre-filled tax forms with respect to details like salary income, tax payment and TDS,” she added.

Providing another relief for senior pensioners, she further proposed there be no tax filing requirement for senior citizens above 75 who only have pension and interest income. A dispute resolution committee for small taxpayers is being planned. “Anyone with taxable income of up to Rs 50 lakhs, or disputed income of up to Rs 10 lakhs, is eligible to approach the dispute resolution committee,” she added.

On the disinvestment target, said the government sees the FY22 fiscal deficit at 6.8 per cent, while she had pegged the deficit at 3.5 per cent for FY21 in the last Budget. The government also plans to privatise two PSU banks and one general insurance company in FY22. The government will bring in the long-awaited LIC IPO in FY22, and plans to complete the disinvestment of BPCL, CONCOR and SCI in 2021-22. While on big borrowing, she proposed that the Centre will borrow Rs 80,000 crores in the remaining two months to meet FY21 expenditure and is projected to borrow about Rs 12 lakh crores in FY22.

On banking and companies, the government allotted Rs 20,000 crores for bank recapitalisation of PSBs. The FM also proposed to revise the definition under the Companies Act 2013 for small companies by increasing their threshold for capitalisation.