‘Rahul Gandhi should clear his stand on Ayodhya’: Amit Shah

Amit Shah was speaking at Trishakti Sammelan of BJP booth-level workers at Parade Ground in Dehradun. 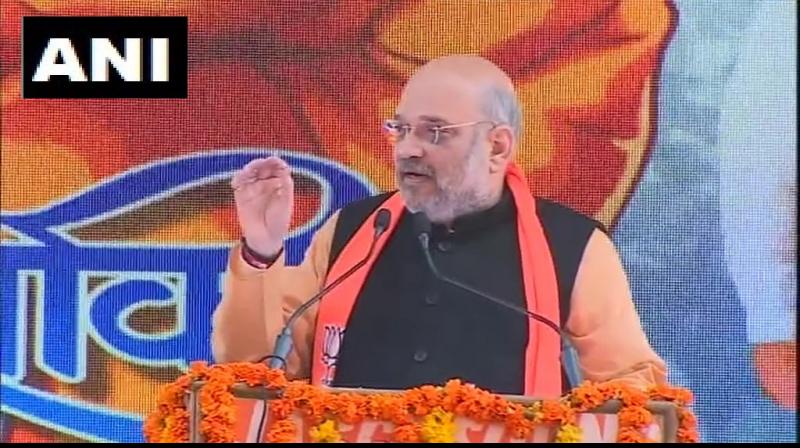 ‘Those who never made eye-to-eye contact, never greeted one another, such Bua-Bhateeja (aunt-nephew) have come on the same forum. This tells how powerful we are,’ BJP president Amit Shah said, targeting the SP-BSP alliance. (Photo: ANI)

Dehradun: Responding to opposition’s harsh criticism of the interim budget, Bharatiya Janata Party (BJP) president Amit Shah on Saturday said the schemes rolled out “for the benefit of the farmers, workers and middle class” have left the rivals “nervous”.

“When Piyush Goyal presented the budget on Friday, those who had been speaking in josh were nervous listening to the announcements. I could not understand why their faces were dull. Why could not they smile,” Amit Shah said addressing a rally of party workers in Dehradun.

Speaking about the budget, he said that this new budget is going to positively affect 12 crore farmers in the country, and mentioned that “This was an occasion to praise the budget but they (opposition) couldn’t do it.”

This was in response to the Congress president Rahul Gandhi criticizing the PM Kisan scheme as useless and that Rs 17 per day for hardworking farmers is no less than an insult to the farmers. The scheme provides Rs 6000 as annual cash support to the farmers directly.

Speaking at the Trishakti Sammelan of the BJP booth-level workers at Parade Ground in Dehradun, Shah also targeted the Bahujan Samaj Party (BSP) chief Mayawati and Samajawadi Party (SP) president Akhilesh Yadav over their alliance in Uttar Pradesh for the Lok Sabha elections this year saying, “Those who never made eye-to-eye contact, never greeted one another, such Bua-Bhateeja (aunt-nephew) have come on the same forum. This tells how powerful we are. They had to be united because of us.”

The BJP president raised the issue of Ram Mandir in Ayodhya with a challenge to Rahul Gandhi asking him to “clear his stand” on the matter. The Congress has accused the BJP of using the Ayodhya issue, which is pending before the Supreme Court, for pure political gains.

“Rahul Gandhi should clear his stand on Ayodhya. I can say without doubt that Ram Mandir will be built there,” said Shah.

Amit Shah was on a short visit of the hill state that has five Lok Sabha seats. The BJP hopes to retain the state’s support for the elections.