‘Fighting alone in Bengal means a four-cornered fight which, in turn, will help the TMC. We can never allow that,’ Cong secy Sarkar said. 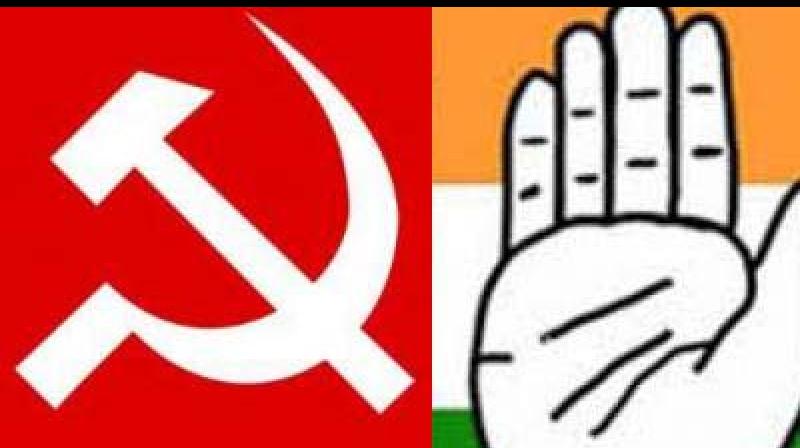 Both the state Congress and CPI(M) leadership are hopeful that a ‘possible solution’ will come up when CPI(M) general secretary Sitaram Yechury meets Gandhi this month. (Photo: File)

Kolkata: Majority of the state Congress leaders are in favour of an informal seat sharing arrangement with the CPI(M) in West Bengal for the upcoming Lok Sabha polls, senior party leaders said. A Congress leader said a section of leaders still want to go alone. Party sources said a final call on the issue would be taken by AICC president Rahul Gandhi.

Once a formidable force in West Bengal, the CPI(M)-led Left Front has yielded much ground to the Trinamool Congress, but still has organisational presence across the state.

Senior Congress leader and chairman of the coordination committee, Pradip Bhattachrya, told PTI that there is a section which is in favour of seat adjustment with the CPI(M) and this section is in the majority.

There is also a section which wants to go alone, he said.

A senior Congress leader privy to the developments told PTI that a meeting would be called of state party leaders this month to decide on the strategy and inform its opinion to the party high command.

Gandhi gave a 'mantra' for strengthening the organisation during a meeting with PCC chief Somen Mitra and party in-charge of state Gaurav Gogoi last month.

Some of the top state Congress leaders have already begun "informal talks" with some CPI(M) leaders over the issue of seat adjustment.

The Congress is mulling fighting at least 18-20 seats out of the 42 seats in the state. It presently has only four seats.

Another state Congress leader said Gandhi had asked them to strengthen the organisation. "He has left the decision to the state unit and will take a final call, after the Bengal unit takes a decision on it. But we are yet to convey our decision on whether we want to fight the Lok Sabha elections alone or in an alliance with the Left in the state," the leader said.

CPI(M) general secretary Sitaram Yechury, during a recent visit to Kolkata, had said his party would try and consolidate the anti-BJP and anti-Trinamool votes in West Bengal in the coming general elections. "Our party's three-point call is clear. Defeat the BJP and its allies, increase the strength of the CPI(M) and other Left forces in Parliament and form an alternative secular government at the Centre in 2019. There is still time, let us see," Yechury had said.

Both the state Congress and CPI(M) leadership are hopeful that a "possible solution" will come up when Yechury meets Gandhi this month.

Presently, the TMC has 34 MPs in the state and the Congress has four MPs. The CPI(M) and the BJP have two Lok Sabha members each.

According to state Congress sources, the Bengal leadership has prepared a three-pronged strategy for the proposed seat adjustment talks with the CPI(M)-led Left Front in Bengal.

Firstly, the total of six seats that was won by the Congress and the CPI(M) in 2014 have to be kept aside and secondly the primary discussion should be on the remaining 36 seats, a Congress leader said.

Thirdly, the seats should be distributed according to the strength of the Congress and the CPI(M) and the latter should be able to accommodate its allies -- the Forward Bloc, the CPI and the RSP -- from its own share, the Congress leader said.

"The proposition is there will not be any formal alliance. It will be a seat adjustment where the CPI(M)-led Left Front will fight in a few seats and the Congress will fight in the other seats," the leader said.

"In the seats where the Congress is not fighting, it will appeal for maximum polling of anti-BJP, anti-TMC votes in favour of a secular candidate," said the Congress leader.

The Bengal Congress is keen on putting up a good show in the state after the party's performance in assembly elections in three Hindi heartland states.

The victory has not only galvanised the party nationally but also had a cascading effect on the morale of the party in Bengal, which for last few years have been marred by defections and infighting.

The Congress sources said the party's resolve to fight against both the TMC and the BJP in the state has been strengthened due to the cold shoulder of the TMC towards the party's victory and its open declaration that it wants to contest alone in all the 42 seats.

"The TMC is not willing to give due importance to the Congress or give it credit for victory in the Assembly polls. So why should we go with them? Fighting alone in Bengal means a four-cornered fight which, in turn, will help the TMC. We can never allow that," Congress secretary Subhankar Sarkar said.

The state Congress unit is miffed with the TMC over the continuous poaching of elected representatives and alleged attack on party workers in the state.

A senior CPI(M) central committee member said he was hopeful that an "adjustment" with the Congress can be worked out and the party would be able to take care of the "demands" of its allies.

The CPI(M) has been able to pacify its allies, the CPI and the RSP, on the issue of seat adjustment with the Congress but the Forward Bloc is not very keen on having any pre-poll adjustment with it in West Bengal.

"The main concern of the allies is, in case of seat adjustment the allies might need to part with their share of seats. If that is taken care of, then we do not think there will be any problem," said a senior CPI(M) leader.