Votes will be counted on October 3 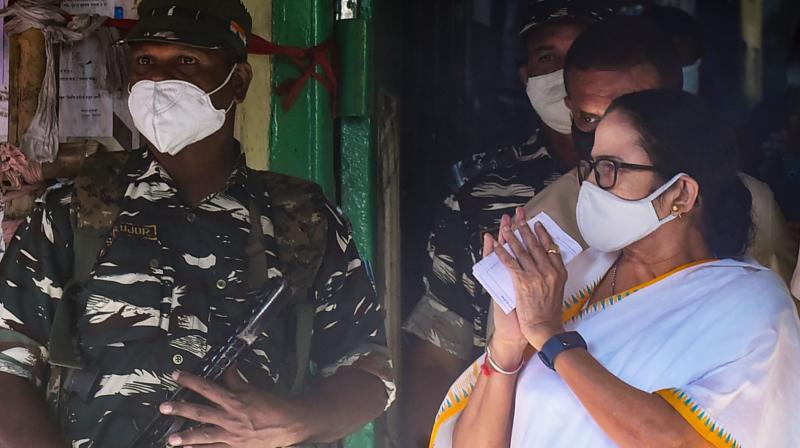 West Bengal CM Mamata Banerjee gestures after casting her vote during the by-election to the Bhabanipur assembly constituency, where the TMC leader is contesting in Kolkata. (Photo: PTI)

Kolkata/Berhampore: The Bhowanipore Assembly by-poll and polls in two other West Bengal seats, conducted under tight security arrangements on Thursday, were by and large peaceful barring some stray incidents of electoral malpractice. Votes will be counted on October 3.

Among the three seats, all eyes were on Bhowanipore where Trinamul Congress supremo Mamata Banerjee contested against young BJP leader Priyanka Tibrewal and the CPI(M)’s Srijib Biswas to become an MLA and continue as the state chief minister.

The constituency in south Kolkata, which is also the home turf of Ms Banerjee, recorded a voters' turnout of 53.32 per cent between 7 am and 5 pm. The poll percentage was, however, higher in the other two Assembly seats which are in Murshidabad. While Shamshergunj clocked 78.60 per cent voter turnout, it was 76.12 per cent at Jangipur.

In the afternoon, the CM, her MP nephew Abhishek Banerjee and state transport minister Firhad Hakim cast their votes. Ms Banerjee cast her vote at Mitra Institution School around 3 pm. Another state minister Sovandeb Chatterjee, who won from Bhowanipore in May but later vacated the seat for Ms Banerjee, cast his vote in the morning.

Unlike Ms Banerjee, Ms Tibrewal was on the road and visited booths throughout the day alleging that the TMC brought "fake voters" from neighbouring constituencies for rigging. A brief street fight broke out between the TMC and BJP workers over trying to allegedly influence voters.

The BJP candidate even caught a youth from Bansdroni in Tollygunge waiting to cast his vote at a booth and lodged a complaint with the Election Commission. Mr Hakim denied her allegations and said she was making a false claim.

At Puddapukur, BJP leader Kalyan Choube claimed that his car was damaged by TMC workers. It was later revealed, through CCTV footage, that two motorcycle-borne youth were involved in the attack over rash driving.

In Shamshergunj, Congress workers allegedly hurled bombs at TMC booth president Jiaur Rahman's house at Ghanashyampur village on Wednesday night. No one was injured. TMC candidate Amirul Islam lodged an FIR over the attack. A TMC dissident and Zila Parishad Karmadhkshya, Anarul Hoque Biplab, was arrested. He is the nephew of Shamshergunj Congress candidate, Jaidur Rahman.

At around 3 pm TMC workers shouted "Go Back" at Congress candidate Jaidur Rahman in Dhusuripara, triggering tension. But Mr Rahman and his followers ignored the provocation. He complained that the TMC workers had rigged polls at a school by locking its gate. However, police denied the allegation. Shamshergunj TMC candidate Amirul Islam was seen trying to influence the women voters by reminding them about Lakshmir Bhandar project of the state government.

At polling booth No 85, allegations surfaced against an on-duty Central force trooper of kicking TMC leader Habibur Rahman when he was distributing masks to women voters. No untoward incident was reported from Jangipur.