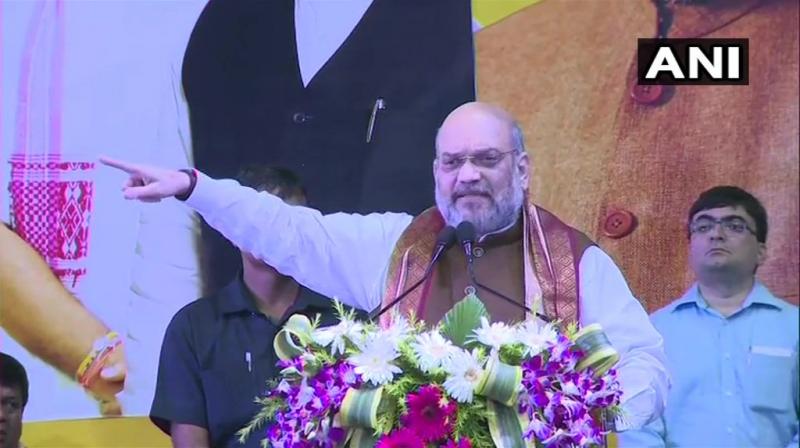 ‘I today want to assure Hindu, Sikh, Jain, Buddhist and Christian refugees, you will not be forced to leave India by the Centre. Don't believe rumours. Before NRC, we will bring Citizenship Amendment Bill, which will ensure these people get Indian citizenship,’ Shah said. (Photo: ANI)

Kolkata: Home minister Amit Shah attacked the All India Trinamool Congress government in Bengal on Tuesday and claimed that the Bharatiya Janata Party will come to power with full majority after the state polls in 2021. He asserted that the BJP has crossed the mark of 300 seats for the first time in the history of LS elections. “The people of West Bengal have a major contribution in it,” he added.

He alleged that the Mamata Banerjee-led government was trying to mislead the people on the issue of the National Register of Citizens (NRC). Reassuring the people he said, “Mamata Di is saying that millions of Hindus will have to leave West Bengal. There is no bigger lie than this. I was to assure the people of Bengal from all communities that nothing of this sort is going to happen.”

He also said, “Mamata Di is saying she will not allow NRC to happen in Bengal. I’m telling you that we will not allow even a single intruder inside India. We will expel all of them. No country in the world can run smoothly with the weight of so many intruders. This series has to stop. We are working towards changing Bengal. We will have to implement NRC to ensure the country’s safety.”

“I today want to assure Hindu, Sikh, Jain, Buddhist and Christian refugees, you will not be forced to leave India by the Centre. Don't believe rumours. Before NRC, we will bring Citizenship Amendment Bill, which will ensure these people get Indian citizenship,” he said.

Amit Shah also pointed out that Mamata Banerjee herself had given a speech on August 4, 2005 in which she had clearly talked about the ouster of intruders. “Political ambitions should not prevail over national priorities,” he said.

Shah said, “After 73 years, you gave us 18 seats, and in response, PM Modi abrogated Article 370 and 35A in the first session of the Parliament.” He also said that Bengal and Article 370 go back a long way in time because hailing from Bengal, Shyama Prasad Mookherji waged the first war against it, and gave his life for the abrogation of the Article 370. “West Bengal and article 370 have a special connection, because it was the son of this soil, Syama Prasad Mukherjee ji who raised the slogan 'Ek Nishan, Ek Vidhan aur Ek Pradhan'.”

Touching the Bengali note, he also said, “Some people say that we are outsiders in Bengal. I want to tell such people that read the history. During Partition, the entire Bengal was about to go to Pakistan. Then, it was our leader, Shyama Prasad Mookherji, who revolted and formed West Bengal.”

Taking another dig at Mamata Banerjee TMC, he said, “Did we replace the communists to see this day? Bengal contributed 27pc of the entire Indian industrial production during Partition. Today, it stands at 3.3 per cent.”