Section 144 had been put in place in Rampur, ahead of SP workers protest against Abdullah Azam’s detention. 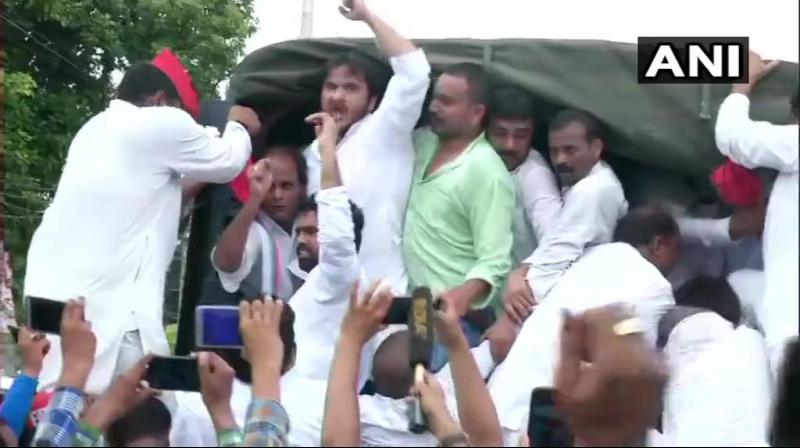 There was heavy security deployed on the border roads leading to Rampur and there is heightened security in Rampur. (Photo: ANI)

Rampur: Abdullah Azam and his supporters have been arrested for violating the section 144 that had been put into effect in Rampur after the police expected Samajwadi Party workers to hold mass protests against the detention of Abdullah Azam, the son of MP Azam Khan

"Section 144 is already in place in view of Kanwar Yatra and Bakra Eid. We have got additional forces, we will not let anyone enter from the border. Anyone who violates law and order will be dealt with strictness," AK Singh, District Magistrate (DM), Rampur said.

Kanwar Yatra is scheduled to continue till mid-August while Eid al-Adha will be celebrated around August 12.

There is heavy security deployed on the border roads leading to Rampur and there is heightened security in Rampur.

Abdullah Azam Khan, son of senior SP leader Azam Khan and an MLA, was detained by the police here for obstructing raids carried out at Jauhar University in Rampur on Wednesday.

SP chief Akhilesh Yadav has asked all party workers to reach Rampur in a big show of strength to support Azam Khan and his son on their allegations that the Yogi government was targetting them through the raids.

Superintendent of Police (SP) Ajay Pal Sharma who carried out raids at the university, said, "While searching the administrative block of the university, we have found more books that were stolen from Madarsa Aliya. We have detained Abdullah Azam for obstructing the raids."

Policemen from several police stations along with personnel of the Provincial Armed Constabulary (PAC) had carried out the raids at the university.

Praveen Kumar, Inspector General, Law and Order said: "He (Abdullah) was not cooperating with police in the University and so to do the work peacefully, Abdullah Khan was arrested under section 151 (Knowingly joining or continuing in assembly of five or more persons after it has been commanded to disperse) of the Indian Penal Code."

On Tuesday, police carried out a raid at Mohammad Ali Jauhar University and recovered more than 100 expensive books allegedly stolen from other institutes in Rampur.

The search was conducted at Mumtaz Central Library of Mohammad Ali Jauhar University, Chancellor of which is Azam Khan.

Police claimed to have recovered more than 2500 expensive books, stolen furniture and manuscripts so far.

According to police, an FIR was lodged at Thanaganj police station, claiming that several expensive books and manuscripts were stolen from Madrasa Aliya and other institutes in the city.

Four people, who were working at the library, were taken to the police station for questioning.

Apart from this, cases have also been registered against MP Azam Khan's Jauhar University administration in an alleged land grabbing case.

The total number of FIRs, as per the police, against Khan, now stands at 26 in cases relating to land grab. The police said the complaints against him were verified and found to be genuine.

According to the complaints, the farmers' lands were illegally occupied through unscrupulous means with the help of a former Circle Officer.