The Congress has been fighting hard under the leadership of state Congress president Adhir Ranjan Chowdhury to make its presence felt. 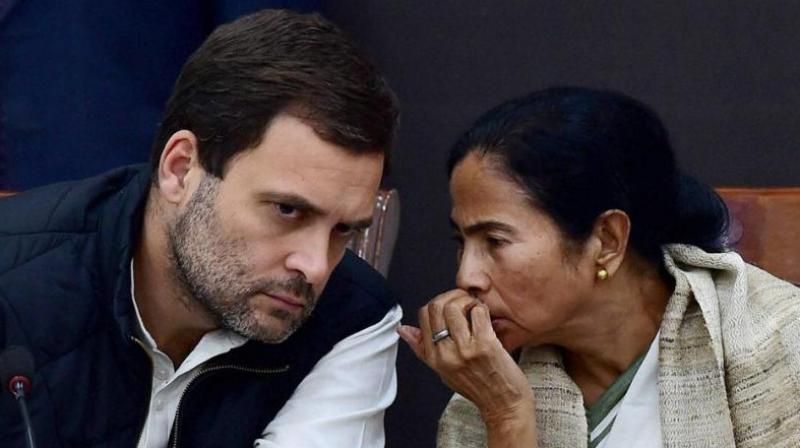 A section of MPs and MLAs feel that aligning with the TMC would be the best way to win the maximum number of seats in 2019. (Photo: File/PTI)

Kolkata: Fissures seem to have appeared in the West Bengal unit of the Congress over the issue of forging an alliance with the TMC for the crucial 2019 polls, with a section of leaders keen on the tie-up and the state leadership rejecting the idea.

The Congress, which lost its political ground to the TMC and the BJP to an extent, has been fighting hard under the leadership of state Congress president Adhir Ranjan Chowdhury to make its presence felt in parts of West Bengal.

Marred with the exodus of its elected representatives to the TMC, the party now seems to be in a fix over the issue of aligning with TMC to stop BJP’s march  in the state.

A section of MPs and MLAs feel that aligning with the TMC would be the best way to win the maximum number of seats in 2019.

State president Adhir Ranjan Chowdhury and other leaders of the party, however, feel aligning with the TMC in Bengal will amount to “committing suicide” for the Congress in the state.

Mr Khan Chowdhury had said he held talks with Chatterjee on the possibilities of forming a grand alliance in the state. “I had come to discuss whether a grand alliance could be formed in our state, on the lines of the (proposed) central model, to combat the BJP in Bengal. I will submit my report to the party high command,” he added.

His move had raised several eyebrows in the state Congress leadership, who were not eager to warm up to the idea of forming any alliance with the ruling party.

When contacted, Maniul Haque, the Congress MLA from Farraka, who had accompanied Khan Chowdhury to Partha Chatterjee’s residence, said he plans to join the Mamata Banerjee party as it has better prospects in the election. “I have decided to join the TMC as it is the only party that can fight against the BJP in the state and at the national level. The Congress alone can’t put up a fight against the BJP.”

The party’s state unit was quick to come out with a rebuttal, stating that no one has been authorised by the party to talk to TMC on the issue of alliance.

Whatever was done by Chowdhury was purely in his personal capacity, the statement added. When asked to comment on the entire episode, Adhir Chowdhury told PTI, “It is for Abu Hasem Khan Chowdhury to come out clean as to why he went to meet the TMC leaders. He is a senior MP.”

He clarified “murdering Congress” and “aligning with TMC” are synonymous in Bengal.

“The TMC is the biggest promoter of the BJP in Bengal. It is because of the TMC that the Congress has weakened in Bengal over the years. Aligning with TMC and committing suicide is same for us,” the PCC chief said.

A senior Congress leader from the central leadership, who is privy to the developments, said the party is in the process of gathering “divergent views” from its Bengal leaders.

“Although there is time to take a call on this matter, but we are in the process of getting divergent views so that an appropriate decision can be taken,” the senior Congress leader said on condition of anonymity.

Another senior Congress MP from Bengal, Pradip Bhattacharya, said the party high command will take the final call on the matter. “One opinion is that we should continue our alliance with the CPI(M)-led Left Front in West Bengal to strengthen our party organisation, while the other is that we should ally with the TMC to win the maximum number of seats. Now it is for the high command to take the call,” Mr Bhattacharya told PTI.

The TMC leadership also chose to maintain silence on the matter.

The Congress and the CPI(M)-led Left Front had forged an alliance in Bengal during the 2016 assembly polls to fight against the TMC in the state.

Although the coalition failed to oust the Mamata Banerjee-led party, the Congress managed to win 44 seats.

In the past two years, the party has lost nearly 11 of its MLAs to the TMC. Barring Manas Bhunia, who resigned as Congress MLA when he was elected as Rajya Sabha MP from TMC, the defectors didn’t resign as legislators after joining the ruling party.

Four other Congress MLAs, who are currently holding talks with the TMC, are likely to follow suit on July 21, during the mega rally of the ruling party.

In the 2014 general elections, the TMC had bagged 34 out of 42 seats in West Bengal. The Congress had secured four seats, while the CPI(M) and the BJP won two seats each.