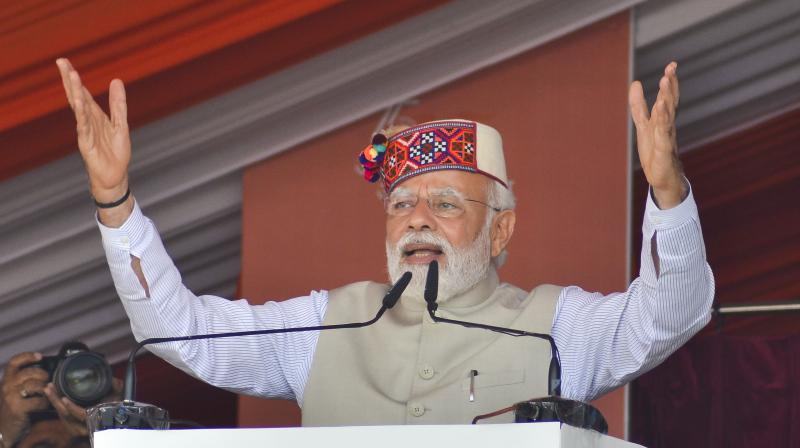 Shimla: Corruption was viewed as an essential part of government before 2014, Prime Minister Narendra Modi said on Tuesday and asserted that India saw a sea change in the last eight years due to the BJP-led dispensation's zero-tolerance towards graft.

At a rally in Shimla's Ridge Maidan to mark the eighth anniversary of becoming prime minister, Modi said, “Now our borders are more secure than they were before 2014.”

He said after coming to power, his government pruned nine crore fake names from the list of beneficiaries of various schemes. “Be it Pradhan Mantri Awas Yojana or scholarship or any other scheme, we have eradicated the scope of corruption through direct transfer of benefits.

“We have transferred over Rs 22 lakh crore to the bank accounts of beneficiaries of various schemes through direct benefit transfer,” the prime minister said.

He claimed that poverty was on the decline in the country and even the international agencies were admitting it.

Modi said that before 2014, there was news about various scams but now his government's development schemes and zero-tolerance against corruption are discussed.

Before 2014, corruption was viewed as an essential part of the government, he alleged.

About his government's measures to combat the Covid pandemic, the prime minister said nearly 200 crore vaccine doses have been administered in India so far.

“Now India extends a hand of friendship not under compulsion but to help others as was done by providing Covid vaccines to several countries,” the prime minister added.

Referring to the under-construction AIIMS in Bilaspur, he said, “We plan to build a medical college in every district of the country.”

“I do not consider myself prime minister. Rather, I consider myself as 'pradhan sevak' and a member of the family of 130-crore Indians and my life is for them,” Prime Minister Modi told the rally.

Before the rally, interacted virtually with beneficiaries of various Central schemes and released Rs 21,000 crore as the 11th instalment of the Kisan Samman Nidhi.

Following his arrival at the Mall Road in the Himachal Pradesh capital, Modi, accompanied by Chief Minister Jai Ram Thakur, walked to the venue of the rally in Ridge Maidan around 11.30 pm. There the prime minister interacted with the beneficiaries of the Central schemes from across the country.

During one such interaction, Modi told Santoshi, a woman from Karnatka's Kalaburagi, that he was impressed by the way she expressed her views and had she been a BJP worker he would have asked her to contest polls.

An ex-serviceman from Ladakh told the prime minister that he has benefitted from the Jal Jeevan Mission and PM Aawas Yojana and faced no hiccup in availing the benefits of the scheme.

Lalita Devi from Bihar's Banka informed Modi that she has got a 'pucca' house and a toilet under the PM Awas Yojana Rural. Pankaj Sahani from Tripura said that he had got a ration card under the 'One Nation, One card' scheme.

Sama Devi from Himachal Pradesh's Sirmaur told the prime minister that she got Rs 1 lakh for building a 'pucca' house under the PM Awas Yojana (Gramin) and that she got Rs. 6,000 in three instalments in a year under the Kisan Samman Nidhi.