The fire broke out at the four-storey building which housed an arts and craft class on May 24. 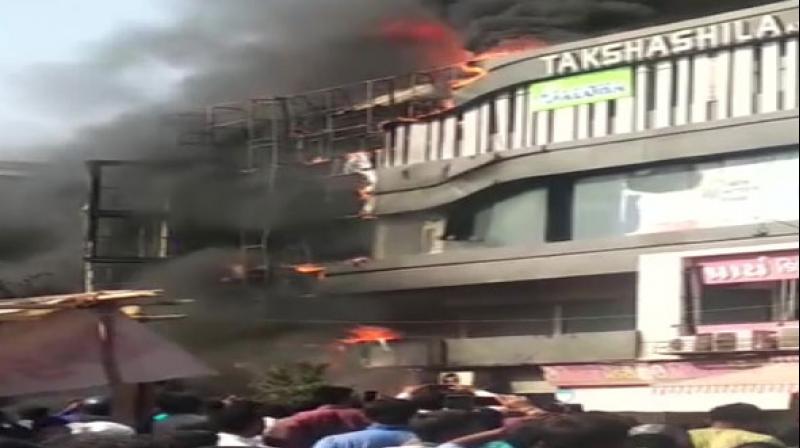 Police appeared to be shielding officials of the Surat Municipal Corporation who were responsible for regularising the 'illegal construction' in the complex, it said. (Photo: File)

Surat: The father of a victim of the devastating fire at a commercial complex here which claimed 22 lives has moved the Gujarat High Court seeking action against civic officials for allegedly regularising illegal construction.

Jaysukh Gajera, who lost his daughter Grishma (17) in the tragedy, has also demanded that the probe be transferred to the state Criminal Investigation Department (CID).

He alleged that the police were shielding the civic officials. The local crime branch on Friday arrested two fire department officers for failing to conduct a fire safety audit of Takshashila Arcade.

The fire broke out at the four-storey building which housed an arts and craft class on May 24. Twenty-two students, 18 of them girls, perished in the fire.

Gajera's petition said the victims' kin have "reasonable apprehension that the investigation will not be impartial and independent and the responsible officers will go scot free".

Police appeared to be shielding officials of the Surat Municipal Corporation who were responsible for regularising the "illegal construction" in the complex, it said.

"The whole incident took place because there were no safety measures in the building and the said illegal structure was regularised by the authorities," it said.

Police had earlier arrested the owner of the coaching class, Bhargav Butani, and builders Harshul Vekaria and Jignesh Paghdal.

Presence of inflammable material including flex banners and tyres on the fourth floor led to the fire spreading quickly, the probe has revealed. The petition is likely to come up for hearing next week.