'The people who are opposing us in the Parliament, they use hatred. They use anger to fight us Congress will love to fight it,' Rahul said. 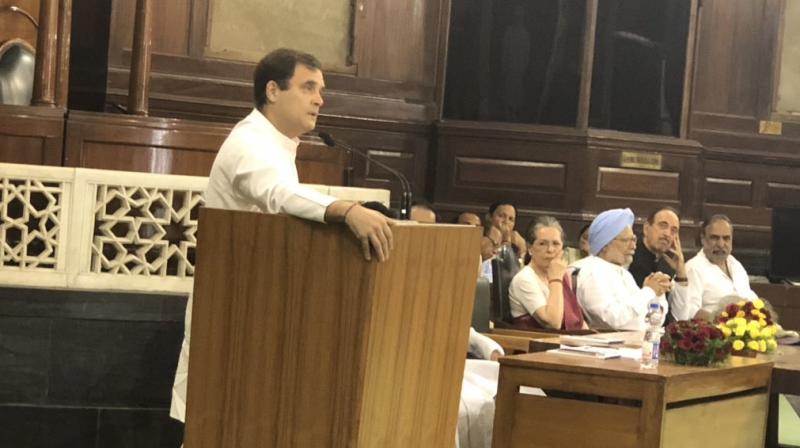 'I would also like to thank all the Congress workers who fought for ,' Rahul said. (Photo: File)

New Delhi: Apparently comparing the BJP regime to the 'British period,' Congress president Rahul Gandhi on Saturday said that no institution in the country was going to support the Congress and it was for the party MPs to fight 'hatred and cowardice' aggressively.

"The people who are opposing us in the Parliament, they use hatred. They use anger to fight us. And as I said throughout the election, there is only one way to fight hatred and anger. There is no other way and that is the love and the affection and the compassion of the Congress party," he said.

"That is why the BJP sits and says that we want Congress-Mukt Bharat because without Congress they have a free run and no one to counter them. There is no opposition against the BJP other than the love and the compassion, the affection of the Congress party. Every single one of you...you are going to enjoy yourself, you are going to shout little more than usual. You are going to have to be little more aggressive," he told the newly elected members.

Rahul said that Congress' 52 MPs are "going to fight the BJP every single inch, without giving this much and that applies to the Members from Rajya Sabha as well."

"I would also like to thank all the Congress workers who fought for this idea, who defended this idea and as ex-President said it is an opportunity for us to introspect, to look inwards, to try and see as to what went wrong, and to try to rejuvenate ourselves. I have no doubt that the Congress party is going to rejuvenate. I have to thank all of you, especially the seniors who are here. You have given a tremendous service in fighting for the Constitution and now you are fighting every single institution," Rahul said.

In the recently held Lok Sabha elections, the BJP registered a landslide victory by winning 303 seats.