On Monday Tej Pratap Yadav created a flutter by announcing to contest as independent from Saran seat. 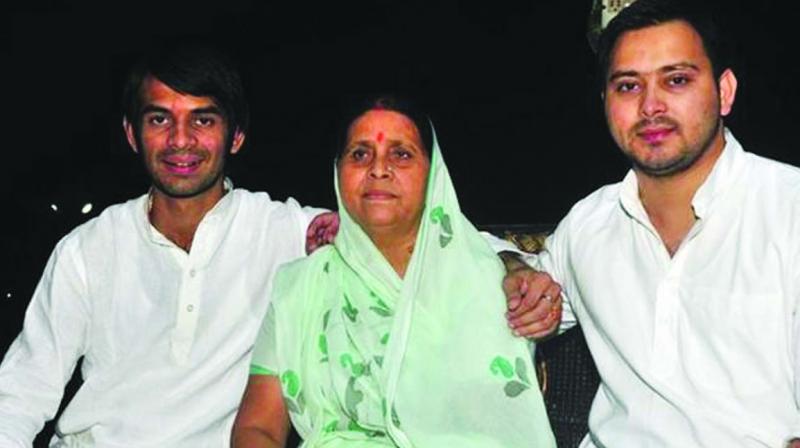 Sources close to Lalu family said he has been upset with his younger brother for fielding his estranged father – in law Chandrika Rai from Saran. (Photo:File)

Patna: RJD is on the verge of the split as party Chief Lalu Yadav’s sons Tej Pratap and Tejashwi seem divided over several issues including ticket distribution.

On Monday Tej Pratap Yadav created a flutter by announcing to contest as independent from Saran seat. Sources close to Lalu family said he has been upset with his younger brother for fielding his estranged father – in law Chandrika Rai from Saran.

“I request my mother Rabri Devi to contest from Saran seat and if she doesn’t I am going to contest as an independent against RJD candidate. Saran has been my father’s traditional constituency and I cannot allow any outsider to contest from that seat”, Tej Pratap said.

Lalu Yadav’s elder son also announced that he would be fielding candidates from Bettiah, Sheohar, Jehanabad, and Hajipur under the banner of Lalu – Rabri front. He, however, clarified that his political front will be part of RJD.

The sudden announcement comes as a major embarrassment for the party ahead of Lok Sabha elections.  As per seat sharing agreement, RJD has already announced candidates for Jehanabad and Hajipur seats. Bettiah seat has also been given to RLSP.

The development comes a day after he resigned as the patron of the party’s student wing. Sources said, “he resigned from the post because Tejashwi Yadav sidelined him while deciding seat allocations”.

The dissent in the RJD has been brewing since Lalu Yadav handed over reins of the party to his younger son Tejashwi Yadav after he was convicted and sent to jail in the fodder scam case.

Party insiders claim that fresh speculations of a rift between Tej Pratap and other leaders including Tejashwi Yadav have confused party workers. His statement also gave fuel to the NDA leaders in Bihar who said that the rift within Lalu Yadav’s family will create a conflict in the party as well as in the grand alliance.