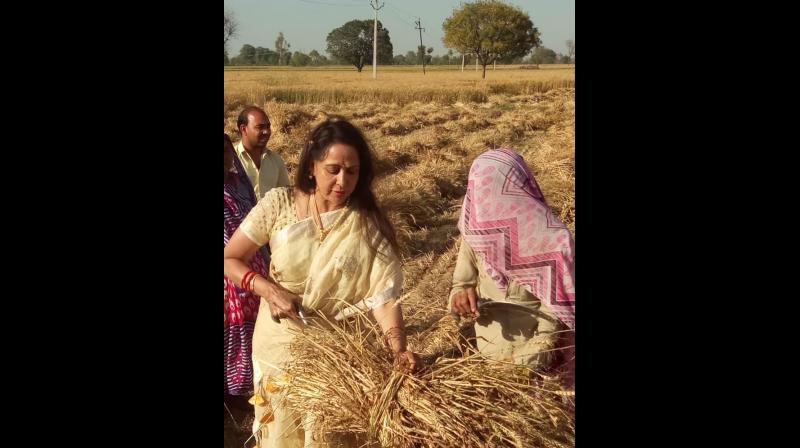 Actor-turned-politician and BJP Member of Parliament (MP) from Mathura parliamentary constituency, Hema Malini who kickstarted her poll campaigning on Sunday were seen lending a hand to women working in a wheat field, carrying bundles of the freshly harvested crop. (Photo: Twitter/@dreamgirlhema)

Mathura: Actor-turned-politician and BJP Member of Parliament (MP) from Mathura parliamentary constituency, Hema Malini who kickstarted her poll campaigning on Sunday were seen lending a hand to women working in a wheat field, carrying bundles of the freshly harvested crop. Malini is seeking re-election from the seat.

On being asked by reporters about her future plans for people in her Lok Sabha constituency, the actor said, "People greeted me happily. They welcomed me because I have done a lot for people of Mathura. I am proud of what I did in Mathura. In the near future, more development will be the only aim. Nobody has done anything for Mathura before me like the way I did."

Sharing her experience, the BJP lawmaker took to Twitter on Sunday and said, "Began my Lok Sabha campaign today with the Govardhan Kshetra where I had the opportunity to interact with women working in the fields. A few fotos for u of my first day of the campaign."

However, a local present there expressed his disappointment by claiming that Malini had not done anything for the development of the city.

He claimed "When Hema Malini came to Mathura she directly went to her guest house to take rest despite knowing that people had been waiting for her since long in the scorching heat. She has not done anything for the constituency. How can we vote for her after seeing all this? There is a lack of proper drinking water in the area. Also, there is a lack of toilet facilities in the area despite being a holy place."

On March 25, Hema Malini filed her nomination from Uttar Pradesh’s Mathura parliamentary constituency. She is the sitting Member of Parliament (MP) from the seat.

Before filing her nomination, she had offered prayers at the Banke Bihari Temple here. She was accompanied by state Chief Minister Yogi Adityanath.

On March 21, Malini had thanked Prime Minister Modi and BJP president Amit Shah for choosing her to contest the 2019 LS polls from Mathura seat again and promised to work hard to bring development in the area.

The seven-phase Lok Sabha polls are set to begin on April 11 and will end on May 19. The counting of votes will take place on May 23.

In Uttar Pradesh, where 80 seats are at stake, polling will be held during all seven phases.