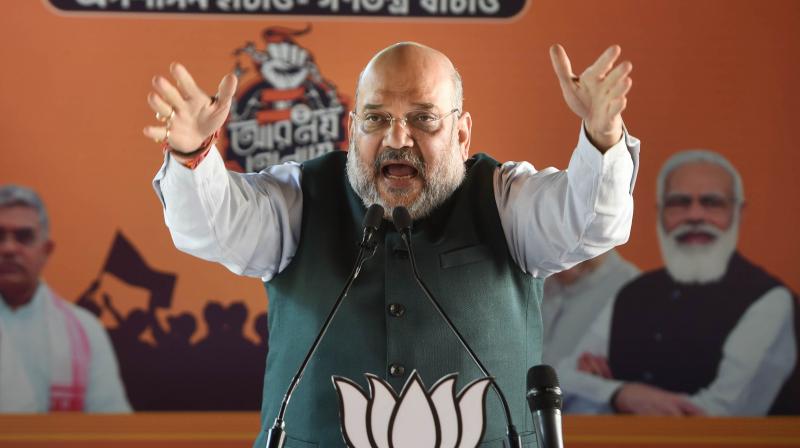 Shah and Rajib, present at the rally, slammed Mamata Banerjee for blocking central schemes like PM Kishan Samman Nidhi in the state. (Photo:PTI)

Kolkata: Making dynasty politics and nepotism as the prime weapon of the BJP against West Bengal's ruling Trinamul Congress in the ensuing Assembly Election, union home minister Amit Shah on Sunday tore into chief minister and TMC supremo Mamata Banerjee for her priority of Bhatija Kalyan (nephew welfare) over Jan Kalyan (public welfare) in the state in his oblique reference to her nephew: Abhishek Banerjee.

The BJP second in command also accused the TMC government of trying to make the young Diamond Harbour MP the successor of Mamata Banerjee as the next CM.

Shah told a BJP rally at Dumurjola Stadium in Howrah, which he was earlier supposed to attend in person, virtually from New Delhi, "Under the leadership of Prime Minister Narendra Modi wherever the NDA has formed it's government across the country, it is undertaking work for public welfare and development so that each and every village and household gets all services But here, no agenda other than making Bhatija a CM exists. The Modi government is committed to all types of public welfare. But the Mamata Banerjee government is only busy in Bhatija Kalyan. It has no agenda of public welfare here."

Buoyed by the induction of former TMC minister Rajib Banerjee, Bally MLA Baishali Dalmiya, Uttarpara MLA Prabir Ghoshal and former Howrah Mayor Rathin Chakraborty, former Ranaghat civic chief Partha Sarathi Chatterjee and actor Rudranil Ghosh to the BJP a day before, the union home minister, in a direct warning to Mamata Banerjee, also reiterated, "The way the bright TMC, Communist and Congress leaders in large numbers have been joining the BJP, Mamatadi, if she looks back as the polls will come closer, will find herself standing alone. There will be no one else to give her company because she has meted out only injustice to the people of Bengal on every count."

Optimistic of the BJP coming to power this time, he even declared, "I ask the people of Bengal not to worry anymore. There is hardly any time left. After the BJP government comes to power, it will propose the Centre's health insurance scheme: Ayushman Bharat in its first cabinet meeting for implementation so that the poor get the Rs 5 lakh coverage for their healthcare."

Shah and Rajib, present at the rally, slammed Mamata Banerjee for blocking central schemes like PM Kishan Samman Nidhi in the state.

Hitting back at Shah, senior TMC MP Sougata Roy alleged, "We wanted to hear from the union home minister about the deterioration of the internal security scenerio, reason behind the blast outside Israeli Embassy and whether there was any settlement with the agitating farmers. Instead of explaining these, he made loose talks. They are yet to prove any evidence against their allegations against Bhatija, if it means Mr Banerjee. I challenge Shah to furnish any evidence against Mr Banerjee."