The Congress now faces the challenge of picking someone younger than Mr Singh as its leader to take on the BJP’s young brigade. 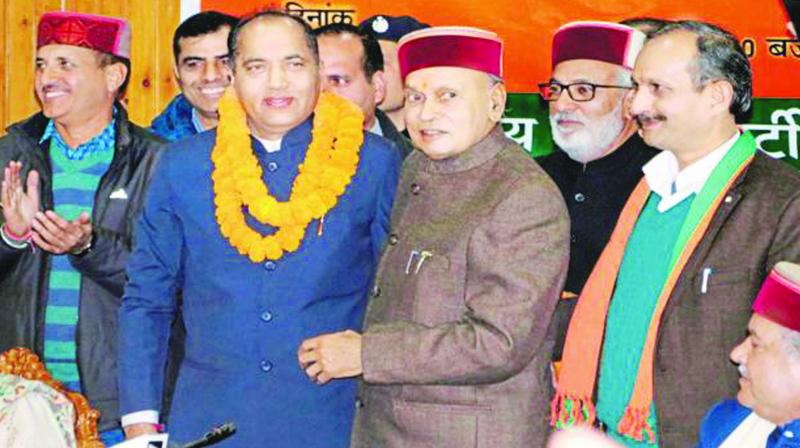 Chandigarh: The BJP’s decision to pick 52-year-old Jai Ram Thakur as chief minister of Himachal Pradesh has signalled a generational shift in the hill state’s politics, mounting pressure on the Opposition Congress to consider a change of guard within its organisation.

The previous Congress government and the party’s Assembly election campaign were led by 83-year-old Virbadhra Singh. The Congress now faces the challenge of picking someone younger than Mr Singh as its leader to take on the BJP’s young brigade.

Before the November 9 polls, Mr Singh had announced that these will be his last Assembly elections. However, the Congress refrained from projecting a younger, second line of leadership in the run-up to the election.

“There are many young options in the Congress to take on the mantle of the Leader of the Opposition,” said a party leader, after party president Rahul Gandhi held a review meeting in Shimla to dissect the outcome of the Assembly polls.

Congress sources said that Mr Singh has still not withdrawn himself from the race for the Leader of the Opposition. However, the next line of leaders in the party is seeing an opportunity to emerge from the shadows of the former ruler of the state.

All India Congress Committee national secretary and in-charge for Punjab affairs Asha Kumari , 62, who has won from Dalhousie, is also a frontrunner for the LoP’s post but her recent slapping-spat with a uniformed police woman in Shimla has put a question mark on her candidature.

Sources said that Himachal Pradesh Congress Committee (HPCC) president Sukhvinder Singh Sukhu, considered close to Mr Gandhi, may throw his weight behind leaders like Harshwardhan Chauhan, 53, who won the Shillai seat for the sixth time, or Ram Lal Thakur, 66, who won the Sri Naina Deviji seat, for heading the Congress in the Assembly. 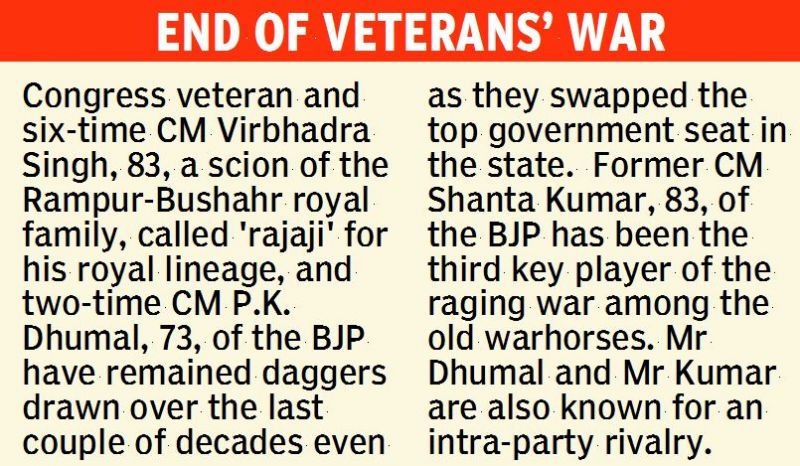 Meanwhile, Mr Thakur has set up a young council of ministers. Seven ministers are less than 60 years, five are less than 55 years and two are less than 50 years. Rajeev Saijal, the SC MLA from Kasauli, is the youngest in the Cabinet at 46.

Mr Thakur’s elevation to the top post, virtually at the cost of party veteran and BJP’s CM candidate P.K. Dhumal, 73, who lost in the polls, marks the end of an era in Himachal politics that was dominated by veteran rivals like Mr Singh and Mr Dhumal.

The new chief minister will have to start delivering from the word go to establish himself as someone equal in stature to his predecessors. He has an opportunity on his hands to redefine the state’s politics but whether he is able to do this will be known with the passage of time.

Over the last there decades Himachal politics was dominated by three faces Virbadhra Singh of Congress and Dhumal, 73, as well as Shanta Kumar, 83, of BJP.

Mr Thakur’s arrival at the scene as the “new face” is set to end the lingering rift between two former BJP CMs, Mr Dhumal and Mr Kumar.