Bala Chauhan learns firsthand of the devastation that traffickers, pimps and madams who run brothels inflict on their victims. 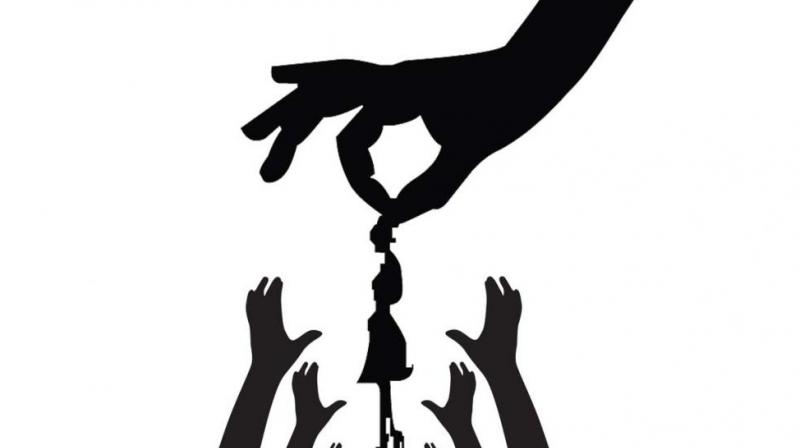 "I no longer want the safety of the law." The 11-year-old girl wept before the Chief Justice, pleading with him to grant her a weapon with which she could finish off her predators. Trafficked from AP and sold to a brothel in Pune, she was raped repeatedly, starved and injected with oestrogen. It's a case even a veteran like former IGP S. Umapathi cannot forget. A week later, he recalls, she died of full-blown aids. In the city, nine women are trying to piece their lives together at Azadi, a short-term rehabilitation center for trafficked women.

Undone by deprivation and naivety, these women are easy targets for predators who whisk them away to cities where they are exploited. Bala Chauhan learns firsthand of the devastation that traffickers, pimps and madams who run brothels inflict on their victims. These are the stories of those who made it through but what of the many victims who continue to suffer in silence?

A group of nine trafficked women is trying to piece their lives together at ‘Azadi’ - a short term rehabilitation centre for trafficked women in Bengaluru North under ‘The Freedom Project India,’ which is headed by founder director Anita Kanaiya.
Neelam (25) from Kolkata has an 18-month-old girl. The father of the child abandoned Neelam when she was two months pregnant.

“I was brought to Bengaluru by a friend who promised to get me a job. She sold me for Rs two lakh to an ‘aunty’ and I was trapped in sex work and dance bars. In between I met a man on Facebook, who promised to marry me but disappeared soon after. I was devastated when I learnt that I was pregnant. I escaped somehow and landed in a government home. I gave birth to my child there. I was recently brought to this place,” said Neelam. Lalita (21) is from Odisha. Her story is no different from Neelam. She was brought to Bengaluru by her ‘lover.’ “He said he would marry me. I was pregnant and I couldn’t have stayed back so I eloped with him. On the train to Bengaluru, he introduced me to another woman. I knew I was trapped. My life was hell when I came to Bengaluru. I was rescued from a brothel by the police, who brought me to a government home for girls,” said Lalitha.

Nadira (22) is from Mumbai. “I am an orphan on the run,” she laughed. “I lived with an ‘aunty’ in Mumbai. She was very abusive. I ran away from her home and landed in a government home. I escaped from there also after a boy I met on Facebook promised to get me a job in Bengaluru. He even bought my flight tickets. Here, I was received by some men, who were his agents. They took me to a PG accommodation in R.T. Nagar, which was full of young girls. All of them worked in dance bars in and around Majestic area. They were trafficked like me. One day the police raided the bar along with an NGO and I was rescued. I want to study and work for society,” said Nadira.

Two of the nine inmates, including Nazira, the youngest, fled home last year after she saw her father set fire to her mother. “There were regular fights at home between my parents. My father was very violent and abusive. One day, my mother poured kerosene on herself and my father set her on fire. I saw it all happen before my eyes and ran away from home. I went from one relative’s house to the other trying to hide from my father, who wanted me to marry a cousin with four children. I landed in a government home for girls and was recently brought to ‘Azadi,” said Nazira.

“Azadi’ is a short tem rehabilitation centre for women, who are survivors of trafficking. We have been licensed by the Department of Women & Child Development to undertake the programme. The women are brought on reference from homes run by similar voluntary organisations. We provide them with education, skill and vocational training for a maximum period of two years. The idea is to prevent them from getting re-trafficked,” said Anita.

‘Girls are caught in a vicious cycle, rescue is easier than rehabilitation’

Jobs, the promise of a better life, an education: These are the people who trade in hopes and dreams, trafficking lakhs of women and children every year. Lured away from their homes and to cities far away, they’re pushed into the sex trade or forced to perform cheap entertainment in dance bars.  All to make ends meet. To these women, survival means ensuring their keepers are happy and huge part of their earnings is taken away as protection money. Boys serve a purpose too, they’re forced into bonded labour, beggary the  illegal organ trade and drug testing.

To those in the know, these are the ‘aunty homes’ by those in the know. Houses rented out in remote corners of the city serve as replacements for brothels, where girls entertain their clients. “Bengaluru doesn’t have a designated red light area,” says an activist, who has been working in the rescue and rehabilitation of trafficked girls. “Traffickers are hand -in-glove with women, who run the sex trade. They take houses on rent in remote areas and girls come in batches of two or three to avoid attracting the attention of the neighbours and the police. They are dropped and picked up by men, who are known to them.”

The girls are caught in a vicious cycle, one they cannot escape from, the activist explains.  That’s not all. The profession affords these women a certain standard of living and they find it difficult to reconnect with the ‘wanting’ and deprivation of their past. Another activist agrees, “Rescue is much easier than rehabilitation. It’s a huge challenge.”

Children below the age of 18 when they are rescued are produced before the Child Welfare Committee. The child is rehabilitated in a government home until she is repatriated to her own home and family by the CWC, in cooperation with the organisation’s chapter in the state concerned.

(Names of survivors of trafficking have been changed to protect identity)